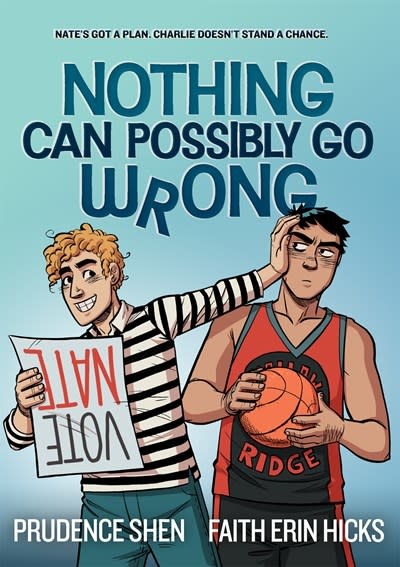 You wouldn't expect Nate and Charlie to be friends. Charlie's the laid-back captain of the basketball team, and Nate is the neurotic, scheming president of the robotics club. But they are friends, however unlikely—until Nate declares war on the cheerleaders. At stake is funding that will either cover a robotics competition or new cheerleading uniforms—but not both.

It's only going to get worse: After both parties are stripped of their funding on grounds of abominable misbehavior, Nate enrolls the club's robot in a battlebot competition in a desperate bid for prize money. Bad sportsmanship? Sure. Chainsaws? Why not. Running away from home on Thanksgiving to illicitly enter a televised robot deathmatch? Sign them up!

Prudence Shen is a writer and caffeine-addict who pays rent in D.C. even though she mostly lives in airports. She loves robots. Not like that.

Faith Erin Hicks is a writer and artist in Vancouver, British Columbia. Her graphic novels include Zombies Calling, The War at Ellsmere, Brain Camp (with Susan Kim and Laurence Klavan), Friends with Boys, Nothing Can Possibly Go Wrong (with Prudence Shen), the Bigfoot Boy series (with J. Torres), The Last of Us: American Dreams (with Neil Druckmann), the Eisner Award-winning The Adventures of Superhero Girl, and the Nameless City series. faitherinhicks.com