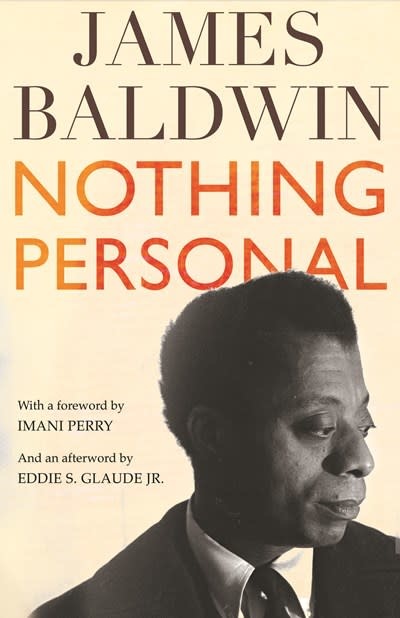 James Baldwin’s critique of American society at the height of the civil rights movement brings his prescient thoughts on social isolation, race, and police brutality to a new generation of readers.

Available for the first time in a stand-alone edition, Nothing Personal is Baldwin’s deep probe into the American condition. Considering the Black Lives Matter protests in the summer of 2020 – which were met with tear gas and rubber bullets the same year white supremacists entered the US Capitol with little resistance, openly toting flags of the Confederacy – Baldwin’s documentation of his own troubled times cuts to the core of where we find ourselves today.

Baldwin’s thoughts move through an interconnected range of questions, from America’s fixation on eternal youth, to its refusal to recognize the past, its addiction to consumerism, and the lovelessness that fuels it in its cities and popular culture. He recounts his own encounter with police in a scene disturbingly similar to those we see today documented with ever increasing immediacy. This edition also includes a new foreword from interdisciplinary scholar Imani Perry and an afterword from noted Baldwin scholar Eddie S. Glaude Jr. Both explore and situate the essay within the broader context of Baldwin’s work, the Movement for Black Lives, the COVID-19 pandemic, and the presidency of Donald Trump.

Nothing Personal is both a eulogy and a declaration of will. In bringing this work into the twenty-first century, readers new and old will take away fundamental and recurring truths about life in the US. It is both a call to action, and an appeal to love and to life.

James Baldwin (1924–1987) was a novelist, an essayist, a playwright, a poet, and a social critic, and one of America’s foremost writers. Nothing Personal first appeared as a collaborative project with photographer Richard Avedon, in an oversized art book, and has never before been available as a stand-alone volume.

Imani Perry is the Hughes-Rogers Professor of African American Studies at Princeton University. Her books include Breathe and Looking for Lorraine.