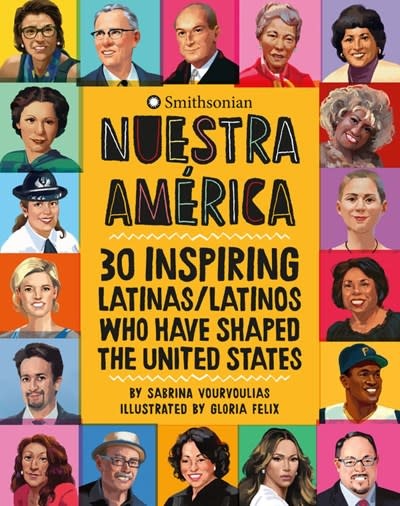 Nuestra America: 30 Inspiring Latinas/Latinos Who Have Shaped the United States

Nuestra América highlights the inspiring stories of thirty Latina/o/xs throughout history and their incredible contributions to the cultural, social, and political character of the United States.

The stories in this book cover each figure's cultural background, childhood, and the challenges and opportunities they met in pursuit of their goals. A glossary of terms and discussion question-filled reading guide, created by the Smithsonian Latino Center, encourage further research and exploration. Twenty-three of the stories featured in this anthology will also be included in the future Molina Family Latino Gallery, the first national gallery dedicated to Latina/o/xs at the Smithsonian.

This book is a must-have for teachers looking to create a more inclusive curriculum, Latina/o/x youth who need to see themselves represented as an important part of the American story, and all parents who want their kids to have a better understanding of American history. Featuring beautiful portraits by Gloria Félix, this is a book that children (and adults) will page through and learn from again and again.

Sabrina Vourvoulias is an award-winning Latina news editor, writer, and digital storyteller. An American citizen from birth, she grew up in Guatemala during the armed internal conflict and moved to the United States when she was fifteen. Her journalism and editing have garnered an Emmy, and an Edward R. Murrow award, as well as multiple José Martí, Keystone, and New York Press Association awards.

In addition to publishing short fiction and poetry, she is also the author of Ink, which was named to Latinidad's Best Books of 2012. She lives in Pennsylvania with her husband, daughter, and a dog who believes she is the one ring to rule them all.

Gloria Félix was born and raised in Uruapan, a beautiful small city in Michoacán, Mexico, one of her biggest inspirations when it comes to Art. Her favorite things to do growing up were drawing, watching cartoons, and eating, which still are some of her favorite things to do. Currently, she lives and paints in Los Angeles.