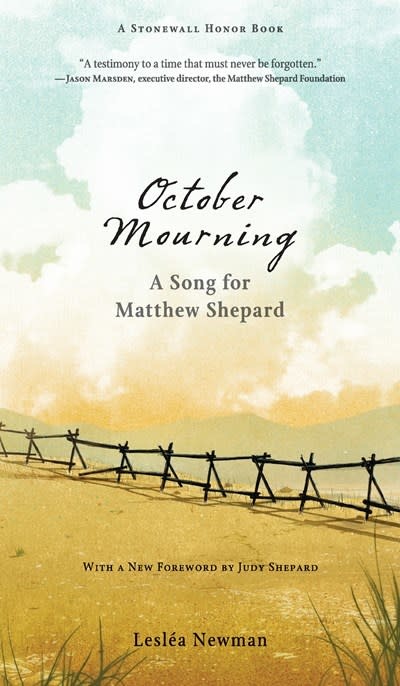 A masterful poetic exploration of the impact of Matthew Shepard’s murder on the world.

On the night of October 6, 1998, a gay twenty-one-year-old college student named Matthew Shepard was kidnapped from a Wyoming bar by two young men, savagely beaten, tied to a remote fence, and left to die. Gay Awareness Week was beginning at the University of Wyoming, and the keynote speaker was Lesléa Newman, discussing her book Heather Has Two Mommies. Shaken, the author addressed the large audience that gathered, but she remained haunted by Matthew’s murder. October Mourning, a novel in verse, is her deeply felt response to the events of that tragic day. Using her poetic imagination, the author creates fictitious monologues from various points of view, including the fence Matthew was tied to, the stars that watched over him, the deer that kept him company, and Matthew himself. More than a decade later, this stunning cycle of sixty-eight poems serves as an illumination for readers too young to remember, and as a powerful, enduring tribute to Matthew Shepard’s life.

Back matter includes an epilogue, an afterword, explanations of poetic forms, and resources.

Lesléa Newman is the author of more than seventy books for children and adults, including the groundbreaking children’s classic Heather Has Two Mommies. She has received poetry fellowships from the National Endowment for the Arts and the Massachusetts Artists Fellowship Foundation. She lives in Massachusetts.