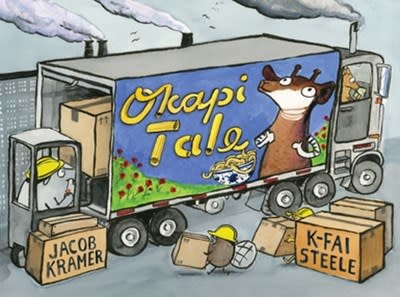 Noodlephant and her friends are back, this time with a tale of power, politics, private property, and of course...pasta!

Now that all animals have equal rights, and the Phantastic Noodler is public property, Beaston is the perfect place for pasta parties. Creatures flock from far and wide to transform string into spaghetti and pillows into ravioli. But things take a turn when a wealthy Okapi-talist sees an investment opportunity. He cuts a deal with the Mayor, buys the Noodler, and suddenly things change for the worse. With privatization come monopoly, exploitation, pollution, and poverty. As for Noodlephant, she’s off in Japan and China, slurping up ramen, soba, and biang biang. What will Noodlephant’s friends face as they struggle to regain their town? Will Noodlephant ever return? And how will Beaston resolve the age old question: To whom does the Phantastic Noodler belong? Read on for a tale of power, politics, and of course … pasta!

Jacob Kramer grew up in Providence, Rhode Island and studied filmmaking and writing in college. Like Noodlephant, he loves to travel, eat noodles, and organize with friends in pursuit of justice. He lives in Somerville, Massachusetts with Bags the cat, Jerry the dog, and Pennie the human.K-Fai Steele grew up in a house built in the 1700s with a printing press her father bought from a magician. She was the 2019 James Marshall Fellow at the University of Connecticut, and the 2018 Ezra Jack Keats/ Kerlan Memorial Fellow at the University of Minnesota. She is a Brown Handler Writer in Residence at the San Francisco Public Library.