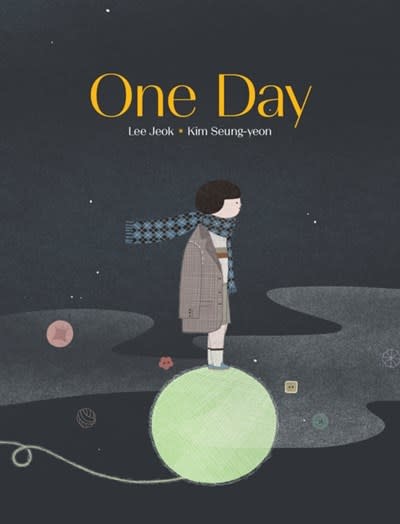 A gentle, delicately illustrated story about loss with both a a sweet sensory dimension, as well as a cosmic one.

A boy’s grandfather goes away suddenly, never to return. How could he leave so suddenly? His smell remains in his sweater, and his shoes are there to be worn. Plus, his friends at the fountain just saw him! The boy lingers in the midst of his grandfather’s things and starts to imagine him returning to the planets and stars, the faraway home from which he must have come.

Lee Jeok is a well-known singer song-writer in Korea, who has released over 100 songs and captivated the public with his lyrics. He has been sharing short stories on his blog [???-leejuck.com], most of which appeared in his first book, "Fingerprint Hunter."

Kim Seung-yeon studied visual design at HongIk University and is running the independent publishing company, Textcontext. She likes drawing with soft, light lines and is also the author of "Fox Hat" and "Yan Yan."