Home » One of These Is Not Like the Others 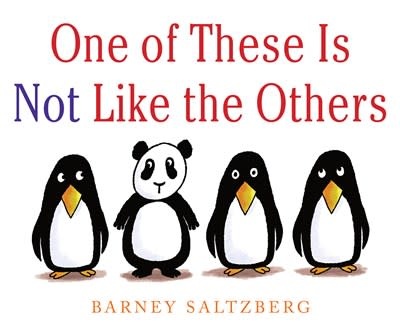 One of these is not like that other—and that’s great! This gently subversive picture book points out—and celebrates!—the differences between subjects.

Barney Saltzberg’s hilarious and delightfully direct text and simple illustrations introduce children to the concept and splendor of inclusiveness, through recognizing who or what’s different on each spread and celebrating the unity as it is.

For example, the reader sees three cows and an elephant accompanied by the text “One of these is not like the other,” turn the page…and all four animals take part in an exuberant conga line and say “that’s just fine with us”!

In a series of similar examples children are encouraged to notice both the similarities and differences between characters and celebrate both.

Barney Saltzberg’s picture book is a pointed and timely tribute to the power of inclusivity and as well as a riotous read-aloud.

Barney Saltzberg is the author of over 40 books for children, including Hug This Book, Beautiful Oops! and the bestselling Animal Kisses series, with over 800,000 copies in print. He’s recorded four albums of songs for children and lives in Los Angeles.