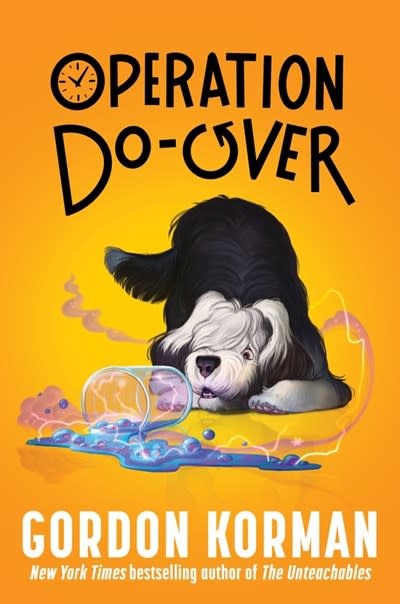 From Gordon Korman, the bestselling author of The Unteachables, comes a hilarious new high-concept friendship story with Back to the Future vibes.

Mason and Ty were once the very best of friends, like two nerdy sides of the same coin. Until seventh grade, when Ava Petrakis came along. Now Mason can trace everything bad in his life to that terrible fight they had over the new girl. The one thing he’d give anything for is a do-over. But that can’t happen in real life—can it?As a science kid, Mason knows do-overs are impossible—so he can’t believe it when he wakes up from a freak accident and finds himself magically transported back to seventh grade. His parents aren’t yet divorced and his beloved sheepdog is still alive. Best of all, he and Ty haven’t had their falling-out yet.It makes no logical sense, but Mason is determined to use this second chance to not only save his friendship (and his dog!) but do other things differently—like trying out for the football team and giving new friends a chance. There’s just one person he’ll be avoiding at all costs: Ava. But despite his best efforts, will he be able to stop the chain of events that made his previous life implode?

Gordon Korman published his first book at age fourteen and since then has written more than ninety middle grade and teen novels. Favorites include the New York Times bestselling Ungifted, Supergifted, The Unteachables, Pop, Notorious, Unplugged, and the Masterminds series. Gordon lives with his family on Long Island, NY. You can visit him online at www.gordonkorman.com.