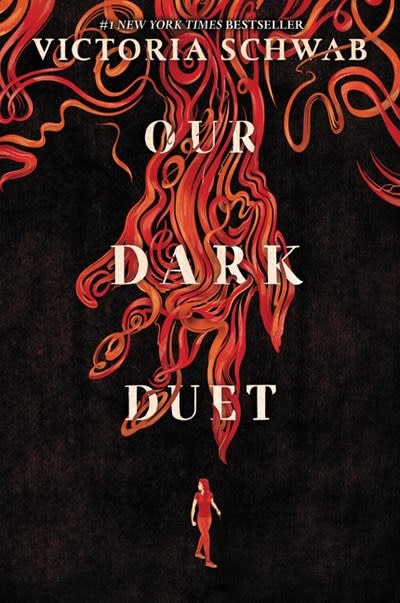 A new look for the bestselling sequel to Victoria Schwab’s instant #1 New York Times bestseller This Savage Song. August Flynn and Kate Harker lead the battle between humans and monsters in a thrilling urban fantasy that Booklist in a starred review called “A stunningly crafted narrative.” For fans of Holly Black and Laini Taylor.

Nearly six months after August and Kate were first thrown together in a plot to start a war, Kate is hunting monsters in a neighboring territory while August fights to get keep Verity from collapsing into chaos. But when a new kind of monster appears—one who feeds on chaos and brings out its victims’ inner demons—it lures Kate home, where she finds more than she bargained for. She’ll face a villain she thought she killed, a boy she thought she knew, and a monster all her own. Our Dark Duet is the engrossing conclusion to the dark urban fantasy begun in the #1 New York Times bestseller This Savage Song. In a starred review, Booklist said “Readers will be hard-pressed to put down this action-driven finale.” Acclaimed and bestselling author Victoria Schwab is quickly taking her place among inventive and lauded creators such as Maggie Stiefvater and Patrick Ness.This repackaged paperback edition will feature brand-new bonus content, including a map of Verity.

Victoria Schwab is the author of bestselling and acclaimed books, ranging from middle grade to adult. Her Shades of London series earned starred reviews and were national bestsellers. Her young adult novels include This Savage Song, Our Dark Duet, and The Near Witch, all New York Times bestsellers. Her work has been optioned for TV and film and has been translated into more than a dozen languages. She lives in Edinburgh, Scotland, and Nashville, Tennessee.