Home » Out of Hiding: A Holocaust Survivor’s Journey to America (With a Foreword by Alan Gratz) 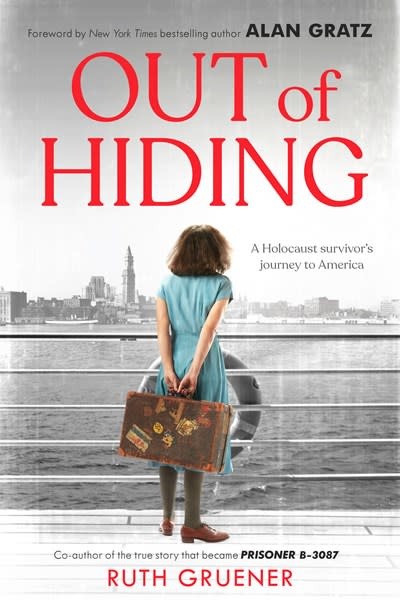 Out of Hiding: A Holocaust Survivor’s Journey to America (With a Foreword by Alan Gratz)

With a foreword by Alan Gratz, New York Times bestselling author of Refugee.

Ruth Gruener was a hidden child during the Holocaust. At the end of the war, she and her parents were overjoyed to be free. But their struggles as displaced people had just begun.

In war-ravaged Europe, they waited for paperwork for a chance to come to America. Once they arrived in Brooklyn, they began to build a new life, but spoke little English. Ruth started at a new school and tried to make friends -- but continued to fight nightmares and flashbacks of her time during World War II.

The family's perseverance is a classic story of the American dream, but also illustrates the difficulties that millions of immigrants face in the aftermath of trauma.

This is a gripping and human account of a survivor's journey forward with timely connections to refugee and immigrant experiences worldwide today.

Ruth Gruener was born Aurelia Gamser in 1930s Poland. Ruth and her parents survived the Holocaust by hiding in the homes of gentile families. After World War II was over, Ruth and her family moved to the United States, where Ruth tried to start an ordinary teenage life in Brooklyn. Ruth married Jack Gruener, another Holocaust survivor, with whom she lived in Brooklyn until Jack's passing in 2017. They have two children and four grandchildren. Ruth works as a docent at the Museum of Jewish Heritage in downtown Manhattan and travels all over the country to speak to schools about her and Jack's experiences in the Holocaust.