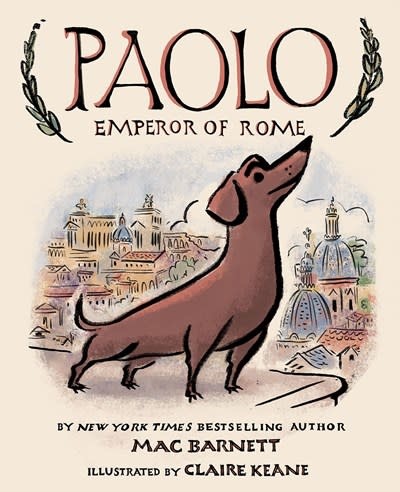 Paolo the dachshund is trapped. Though he lives in Rome, a city filled with history and adventure, he is confined to a hair salon. Paolo dreams of the sweet life—la dolce vita—in the Eternal City. And then, one day, he escapes! Paolo throws himself into the city, finding adventure at every turn. Join our hero as he discovers the wonders of Rome: the ruins, the food, the art, the opera, and—of course—the cats. Readers will cheer the daring of this bighearted dog, whose story shows that even the smallest among us can achieve great things.

Mac Barnett is the coauthor of the Terrible Two series and the author of many picture books, which have won multiple Caldecott Honors. Claire Keane studied graphic design in Paris before moving to Los Angeles, where she worked at Walt Disney Feature Animation for 10 years and contributed to Frozen, Tangled, Enchanted, and many other films. She now lives in Venice Beach, California, where she writes and illustrates children’s books.