Home » Papa Brings Me the World 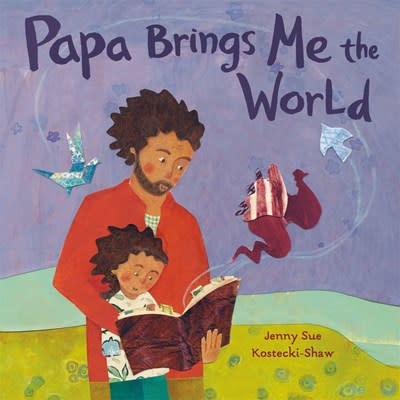 Papa Brings Me the World

A poignant picture book that celebrates the bond between father and daughter and follows their long distance trip around the world.

When you keep your eyes and heart wide open, new friends await you wherever you go.

Most parents drive a car or ride a bus or train to work—but not Lulu’s papa. He navigates mountains, deserts, and oceans, each time returning home with pockets full of treasures. There’s an ancient calculator from China, a musical mbira from Zimbabwe, and special games from Sumatra. But the best treasures are special stories Papa tells when he comes home—tales of playing peek a boo with rare birds in the Andes and riding dragons in the Irish Sea.

This long-distance love story between parent and child celebrates inclusivity, imagination, and the richness of global cultures. For fans of The Day You Begin by Jacqueline Woodson and Drawn Together.

Jenny Sue Kostecki-Shaw is the author and illustrator of Luna & Me: The True Story of a Girl Who Lived in a Tree to Save a Forest, My Travelin’ Eye and Same, Same But Different, for which she won the Ezra Jack Keats New Illustrator Award and the South Asia Book Award. A freelance artist who studied at the Kansas City Art Institute and the Illustration Academy, Jenny lives in the mountains of northern New Mexico with her family.