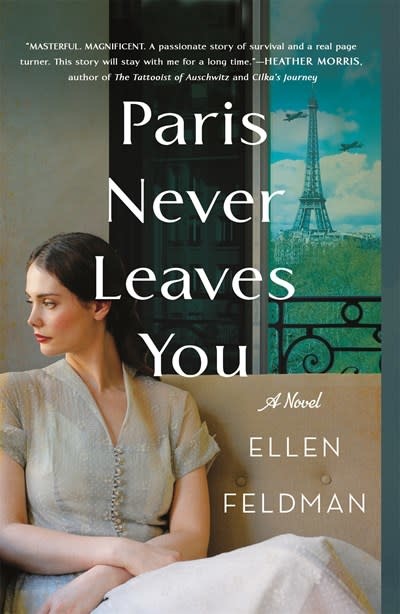 "A passionate story of survival [and] a real page turner."

Charlotte is a survivor. She lived through WWII in Paris, working in a bookstore under the watchful eye of the Nazis. Now she and her daughter, Vivi, are safely settled on the upper east side of Manhattan. She's found a place for herself as an editor in the clubby, eccentric world of NYC publishing and she's drawn to a man who could quite possibly be the love of her life. However, Vivi is beginning to ask questions about her mother's past. No one but Charlotte knows her new life has been built on a foundation of lies, one she began to lay the day her fate became entwined with that of a German officer. As everything Charlotte is building for herself and her daughter is threatened, she's forced to reckon with her past and in doing so risk all she has gained. Alternating between wartime Paris and 1950s New York publishing, Paris Never Leaves You is a compelling story of resilience, love, and impossible choices, exploring how survival never comes without a cost.

ELLEN FELDMAN, a 2009 Guggenheim fellow, is the author of Terrible Virtue, The Unwitting, Next to Love, Scottsboro (shortlisted for the Orange Prize), The Boy Who Loved Anne Frank (translated into nine languages), and Lucy. Her last novel, Terrible Virtue, was optioned by Black Bicycle for a feature film.