Home » Pay Up: The Future of Women and Work (and Why It's Different Than You Think) 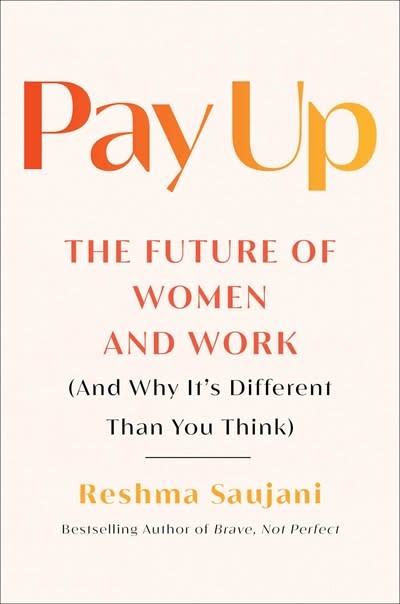 Pay Up: The Future of Women and Work (and Why It's Different Than You Think)

What would America look like if it valued moms? From the New York Times bestselling author and founder of Girls Who Code, a bold plan to make motherhood visible, compensated, and powerful.

After years advocating for women and girls to smash glass ceilings and blaze their own trails, Reshma Saujani found herself on the floor of her bathroom, exhausted from trying to balance infinite responsibilities. She wasn’t alone. America’s 90 million mothers are in crisis.

Globally, women lost $800 billion in wages last year. Unemployment among women rose from 3.1 percent to nearly 15 percent. Anxiety among mothers tripled, and almost 70 percent of mothers reported a decline in physical health due to stress. Decades of failed social movements focused on workforce parity have left mothers overwhelmed and under-resourced.

Saujani has a solution: The Marshall Plan for Moms—a proposal to compensate mothers for their unseen, unpaid labor.

In Pay Up, the New York Times bestselling author lays out a bold set of plans to recast motherhood, including government payments to moms, dramatic shifts in workplace policy, and radical culture change. And she gives voice to moms themselves, interviewing hundreds of women who are tired of shouldering more and more responsibility, only to be told that the solution is to find “me-time” or to “lean in.” In doing so, she realizes that the ideal of a 50-50 partnership in the home is a lie, and that overwork is a path to burnout, unhappiness, and rage.

Both a call to action for government and business leaders and a bold critique of 20th-century feminism, Pay Up is a demand for help from the millions of women who need it.

Reshma Saujani is a leading activist and the founder of Girls Who Code and the Marshall Plan for Moms. She has spent more than a decade advocating for women and girls’ economic empowerment, working to close the gender gap in the tech sector, and most recently advocating for policies to support moms impacted by the pandemic. Saujani is also the author of the international bestseller Brave, Not Perfect, and her influential TED talk, “Teach girls, bravery not perfection,” has more than five million views. Beginning her career as an attorney and Democratic organizer, she now lives in New York City with her husband, Nihal, their sons, Shaan and Sai, and their bulldog, Stanley.