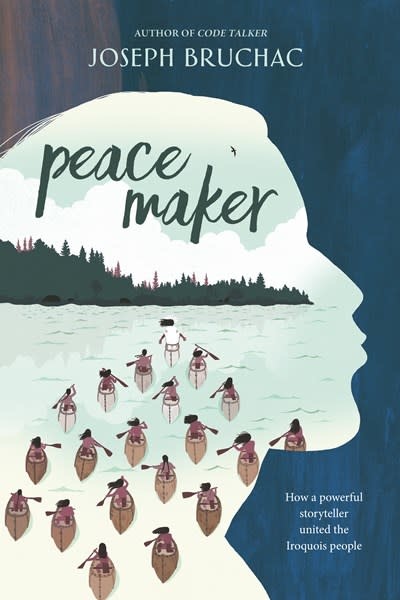 A twelve-year-old Iroquois boy rethinks his calling after witnessing the arrival of a mystical figure with a message of peace in this historical novel based on the creation of the Iroquois Confederacy.

Twelve-year-old Okwaho’s life has suddenly changed. While out hunting with his best friend, his friend is kidnapped by marauders from a neighboring tribe. Okwaho barely escapes back to his village where everyone lives in fear of raids and killings: The five tribes of the Iroquois have been at war with each other for far too long, and no one can even remember what it was like to live in peace.

Okwaho seeks only revenge, which will just perpetuate the violence. But before he can retaliate, a visitor with a message of peace, as told in the lore of the of the Iroquois nation, comes to him in the woods. The Peacemaker—a vision in white buckskin with a calm demeanor and soothing words—tells the boy that he can convince even the most warlike leaders of the wisdom of peace. Okwaho joins the legions of others who believe, and is present when the great treaty creating the Iroquois Confederacy is enacted.

Joseph Bruchac is a highly acclaimed children’s book author, poet, novelist, and storyteller, as well as a scholar of Native American culture. His work has appeared in hundreds of publications, from Akwesasne Notes and American Poetry Review to National Geographic and Parabola. He has authored many books for adults and children, including Code Talker: A Novel About the Navajo Marines of World War Two, Talking Leaves, and Two Roads.