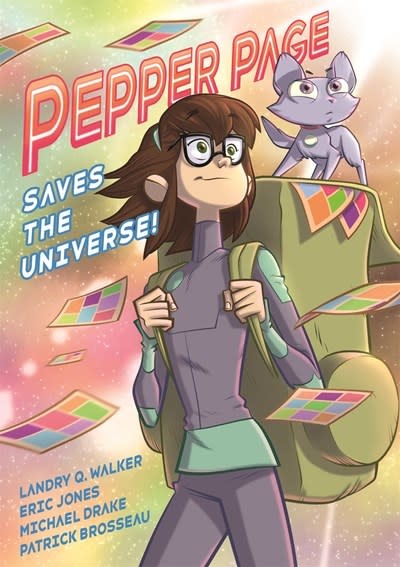 A middle-grade futuristic superhero story about a shy comic book girl-geek becoming her own superhero inspiration.

The year is 2421. Awkward and shy, Pepper buries herself in the universe of the classic fictional superhero Supernova to avoid dealing with the perils of the ninth grade. But then fate intervenes when Pepper encounters a strange cat named Mister McKittens and stumbles into a volatile science experiment run by a sinister substitute teacher named Doctor Killian.

Pepper is flung into another dimension, bringing her face-to-face with an order of cosmic beings who declare her to be the steward of their great power, champion of harmony in the universe, and protector of worlds present and past.

Now, in the twenty-first century, Pepper finds that she herself is the real Supernova. But as Pepper soon learns, escapist fantasy and reality are two very different things.

Landry Q. Walker is a New York Times-bestselling author who has been making stories happen for over twenty-five years. He has worked on Batman, Supergirl, Star Wars, Frozen, and most everything else. When he is not randomly punching letters on a typewriter, he can be found in his backyard, absolutely failing to grow pumpkins. landrywalker.com

Eric Jones has been drawing and painting since he was two years old, which is a very long time. Usually working with his friend and nemesis Landry Q. Walker, he has drawn everything from Star Wars to Batman to Supergirl to Phineas and Ferb. He collects old toys, listens to punk rock, and sometimes leaves the house, usually for groceries.