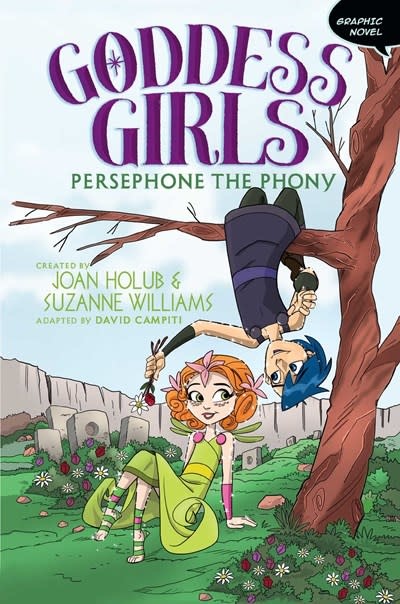 Persephone befriends resident bad boy Hades in this second book in the Goddess Girls Graphic Novel series, based on the popular and long-running Goddess Girls series.

Persephone’s mom encourages her to “go along to get along” instead of doing what she really wants, and Persephone follows her advice even when it makes her feel like a fake. But when she meets Mount Olympus Academy troublemaker Hades, she finally feels she has found someone she can be herself with. He’s the first person who actually listens to her, and she finds herself liking him, despite the fact that the other goddess girls think he’s bad news. But if he makes her feel so special—and she’s so comfortable hanging around him—can he really be all that bad?

Joan Holub has authored and/or illustrated over 140 children’s books, including the Goddess Girls series, the Heroes in Training series, the New York Times bestselling picture book Mighty Dads (illustrated by James Dean), and Little Red Writing (illustrated by Melissa Sweet). She lives in North Carolina and is online at JoanHolub.com.

Suzanne Williams is a former elementary school librarian and the author of over seventy books for children, including the award-winning picture books Library Lil (illustrated by Steven Kellogg) and My Dog Never Says Please (illustrated by Tedd Arnold), and several chapter book and middle grade series. She also coauthors the Goddess Girls and Thunder Girls series with the fantastic Joan Holub. Visit her at Suzanne-Williams.com.

David Campiti is an animation producer and voiceover actor and is CEO of Glass House Graphics/Cutting Edge Animation & Publishing Services. His talent team has worked on such features as Despicable Me, Rio, Gnomeo & Juliet, and Horton Hears a Who—and fully produced Niko: The Journey to Magika and El Americano.