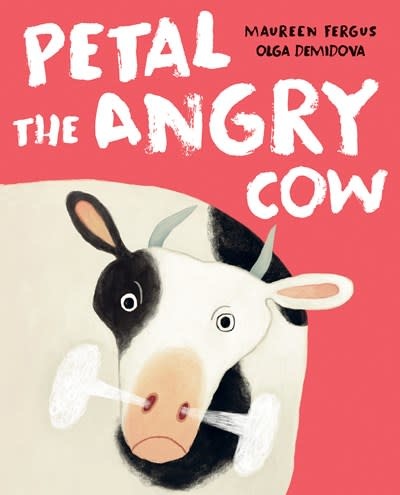 A hilarious barnyard tale about big-hearted cow with an even bigger temper, for fans of Penguin Problems.

Petal is everything you could want in a cow.

She is kind, thoughtful, a great baker and a wonderful artist.

She also has a temper. A very big, out-of-control temper. And it doesn’t help that her barnyard pals like to push her buttons…

On the day the farmer announces a fabulous trip to a water park, the horse steps on Petal’s foot and she has her biggest tantrum yet. The farmer tells Petal if she doesn’t get her temper under control, she won’t be able to go to the water park!

What else can she do but stomp away in a huff?

Then Petal meets a swan who shows her a thing or two about behaving. And not in the way you’d expect…

This laugh-out-loud story will tickle even the surliest reader, and Petal’s outsized tantrums will feel very familiar to parents and kids alike. But like Petal, this story also has a heart of gold and a core of pure warmth.

MAUREEN FERGUS is an award-winning author of books for kids of all ages. Her books have been translated into a dozen languages, optioned for film and adapted for stage. Her picture books include InvisiBill, The Day Santa Stopped Believing in Harold, and You’re In Good Paws; and she’s also the author of the upcoming Weenie early graphic novel series. When not writing, Maureen runs, reads, bikes, bakes, works and hangs out with her husband, three kids and Buddy the Wonder Dog, who rarely has tantrums.

OLGA DEMIDOVA was born and raised in Russia, where she studied at the Moscow Art Institute of Applied Arts. Olga started work as an animator, but her tremendous passion for illustration sent her in a different direction. Now she publishes books and apps for children all over the world. Olga lives in Moscow, and she does not know an angry cow personally.