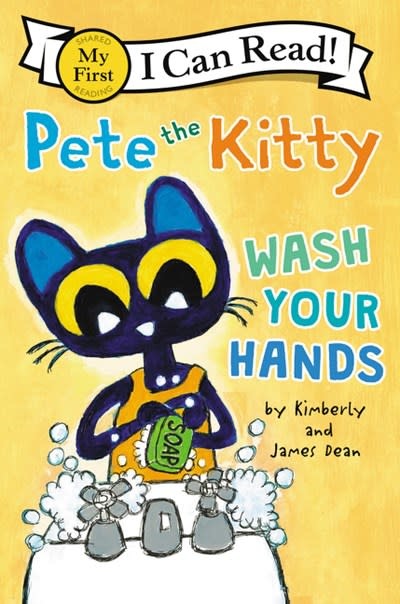 Pete the Kitty: Wash Your Hands

From New York Times bestselling creators Kimberly and James Dean comes the next Pete the Kitty I Can Read (My First) where Pete the Kitty learns to wash his hands!

Splish, splash! Keeping clean is groovy and fun! Pete must wash his hands many times a day. He must wash them after he sneezes, coughs, plays with his friends, eats his food, and throws away his trash. Join Pete the Kitty as he learns how to properly wash his hands.Early readers will love learning how to wash their hands with Pete!

Kimberly Dean is an artist, yoga enthusiast, and a New York Times bestselling author. She is also a co-creator of children’s book character Pete the Cat. Before fulfilling her dream of becoming a full-time author and artist, she worked for the state of Georgia, leaving the governor’s press office in 1998 to pursue her art. In 2004, she began collaborating with fellow artist James Dean to create children’s books about Pete the Cat. Her dreams of becoming a published children’s book author became a reality in 2013 with the release of her first children’s book, Pete the Cat and His Magic Sunglasses. She has now written many of the Pete the Cat books, as well as many other series, including Willow & Oliver. Kimberly lives in Savannah with her dog, Gypsy, and cat, Phoebe. Her favorite word is “Lovie,” which is the name her grandchildren lovingly call her.James Dean is the original creator and illustrator of Pete the Cat. He is a self-taught artist originally from Fort Payne, Alabama. James earned his degree in electrical engineering from Auburn University and went on to work for Georgia Power for a number of years. Eventually, he was called to pursue his art full-time; it was during this time that he began creating paintings and drawing of his cat, Pete. James Dean’s art has been sold in more than ninety galleries and shops across the United States. He published his first book, The Misadventures of Pete the Cat, a history of his artwork, in 2006, and he illustrated his first self-published children’s book, Pete the Cat: I Love My White Shoes, in 2008. There are now almost 100 published Pete the Cat titles with more coming out all the time. James is humbled every day by the success that this groovy blue cat has brought him. He says positively affecting children’s lives is his number one priority, and he is grateful to have such an amazing audience to work for.