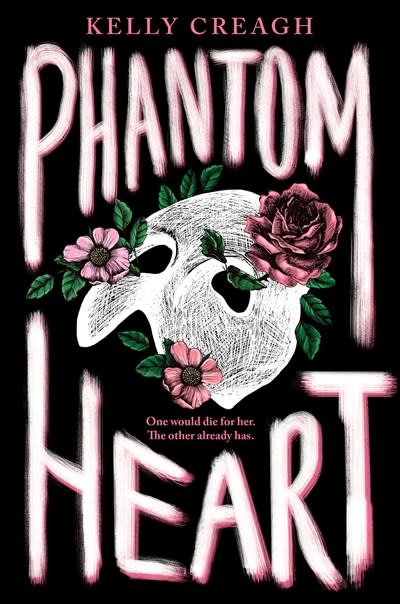 Seventeen-year-old Stephanie Armand doesn’t believe in ghosts or spirits. Despite her six-year-old sister insisting a masked figure is hiding in her closet, and the rumors at school, Stephanie isn’t convinced her father’s latest renovation project—a crumbling Victorian mansion—houses the soul of a monster. So when the very charming (and paranormal-obsessed) Lucas Cheney takes an interest in both Stephanie and her notorious home, Moldavia, the supernatural and romantic activity escalates to an all-time high. But then there’s Erik—the dashing British boy, seemingly from another era, who’s taken up residence in Stephanie’s nightly dreams. A boy who may have something to do with the man in the mask, and the strange occurrences taking place at Moldavia.

Kelly Creagh is the author of the Nevermore trilogy, a contemporary paranormal romance heavily influenced by the life, works, and mysterious death of Edgar Allan Poe. Nevermore (2010), Enshadowed (2012), and Oblivion (2015) were all published in hardcover by Atheneum and still enjoy a strong fandom and readership. Buzzfeed named Nevermore one of 21 Amazing Young Adult Series That Ended in 2015. Nevermore has been published in multiple languages and countries including Poland, Brazil, Germany, and Hungary. Kelly Creagh is a graduate of Spalding University’s MFA in Writing program. She teaches creative writing workshops for children, teens, and adults, and is a regular guest speaker and lecturer for the Louisville literary community and local libraries and schools. Kelly has also guest lectured at the SCBWI Midsouth conference and is a current SCBWI member.