Home » Pizazz vs. the New Kid 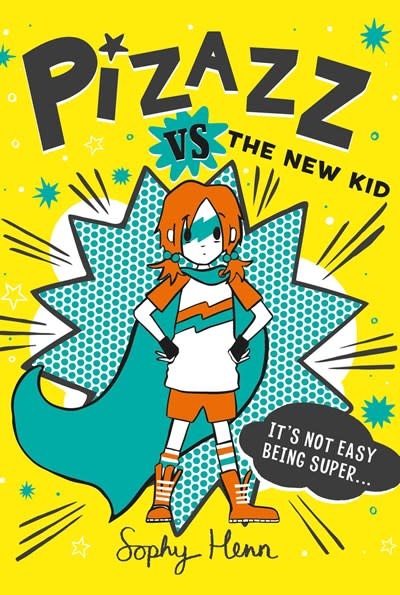 Pizazz vs. the New Kid

Snarky, reluctant caped crusader Pizazz butts heads with another superhero kid in this hilarious and highly illustrated new novel—perfect for fans of Dog Man and Diary of a Wimpy Kid.

There’s a new kid at Pizazz’s school…a new super kid. A super competitive, super skilled, super popular superhero. At first, Pizazz hopes Jett being in her class will mean the Populars will have someone new to pick on. But instead of becoming a target of ridicule like Pizazz, Jett becomes the coolest kid in school. Talk about unfair.

Jett seems to be good at everything, both normal and super, and he takes every opportunity to show Pizazz how it’s done. Soon Pizazz starts to wonder…if Jett can be super and cool, why can’t she? All she has to do is prove who’s really the most super around here.

Jett and Pizazz’s competition brings her nothing but scrapes and humiliation. Then, Pizazz’s worst nightmare comes true. She and Jett are going to have to work together to save the world. But, of course, no matter how they feel about each other, at the end of the day they’re superheroes and will do their job without a problem…right?

Sophy Henn is an award-winning picture book author and illustrator with a master’s in illustration from the University of Brighton. She is the creator of the much-loved Bad Nana series, the Pom Pom series, the Ted board book series, and the nonfiction titles Lifesize and Lifesize Dinosaurs, among others. Her debut picture book Where Bear? was nominated for the Kate Greenaway Medal and shortlisted for the Waterstones Children’s Book Prize. Sophy was the World Book Day Illustrator in 2015 and 2016.