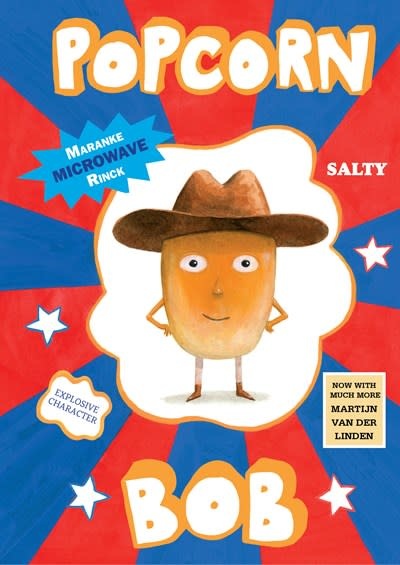 But one day her school goes on a healthy eating campaign and her dads decide to follow suit, banning all snack foods from their house, INCLUDING POPCORN. Unfair. Ellis has got to get around that edict, so one night she pops a bag of popcorn out back in the garage...and she's met with more than just her favorite salty snack. One kernel refuses to pop, and soon it's sprouted a face, arms, and legs! He introduces himself as Popcorn Bob, and he is NOT in a good mood. (Ever, really.) He's absolutely ravenous, and no amount of food keeps him from being hangry. Bob causes no end of chaos for Ellis, and she decides to rid herself of him once and for all, except...she actually starts to like him.

A chapter book for all ages, Popcorn Bob is a laugh-out-loud story about the power of friendship, and a perfect bowl of popcorn.

Maranke Rinck is an award-winning children's book author who seeks to make reading and writing fun for the young and old. She often works with her husband, illustrator Martijn van der Linden. With their three children they live in a former butcher shop in Rotterdam. You will not find sausages and meatballs in their house anymore, though; the cold stores are full of manuscripts, drawings and paintings.

Martijn van der Linden is a Dutch illustrator of children's books. He has won multiple awards including the certificate of honor (IBBY), the Golden Parent's Choice Award, and the Goldfinch award for the picture book I Feel a Foot! In 2016 he won the Dutch national award for the best Children's book (the Woutertje Pieterse award) for his book Vote for the Okapi. His books have been translated into over 12 languages. Martijn works from his home in Rotterdam where he lives with his wife, children's book writer Maranke Rinck, and their three children. Maranke and Martijn have created several picture books together.

Nancy Forest-Flier is an American-born translator, editor, and writer living and working in the Netherlands. She has translated several adult and children's novels from Dutch to English, her writing has appeared in many British and American museums, and she has translated for numerous Dutch museums and institutes including the Anne Frank House. She has six children, ten grandchildren, and one cat.