Home » PopularMMOs Presents Enter the Mine 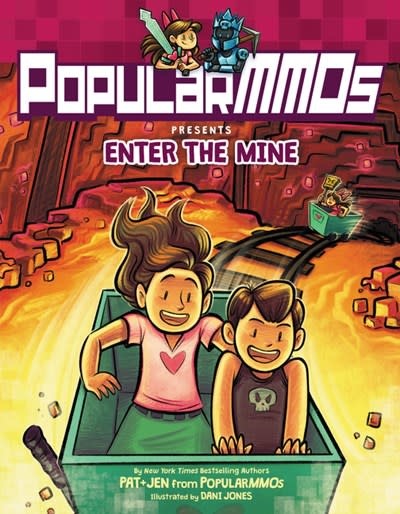 PopularMMOs Presents Enter the Mine

New York Times bestselling authors and YouTube sensations Pat and Jen from the Minecraft-inspired channel PopularMMOs fall into a “hole” new world of trouble when Evil Jen comes up with a sinister scheme in the sequel to their bestselling graphic novel adventure, now in paperback!

Pat and Jen—stars of one of the world’s most popular YouTube channels, PopularMMOs—return to a Minecraft-inspired world in their second full-color graphic novel. After Pat and Jen saved Bomby; their cat, Cloud; and one hundred friendly zombies from the clutches of Evil Jen and brought them home from the underworld, they thought their adventuring days were over. But ever since their return, mysterious new holes have started appearing—and more and more of their friends have started disappearing!

After Jen stumbles into one of the holes, she finds herself stuck on the wrong side of reality, with a key that doesn’t work and no friends to help her get back home. When Pat rushes in to try to help, they both find themselves trapped in a dark, dank boomium mine. They’ll have to free their friends and figure out who’s behind it all if they’re going to have any hope of finding their way out—before it’s too late.

Join YouTubers PopularMMOs and all their favorite characters on this quest to protect the world they know in the sequel to their New York Times bestselling graphic novel. It’s another rollicking, fast-paced, hilarious adventure, full of the best-loved characters from one of the world’s most popular YouTube channels, PopularMMOs.