Home » Preventable: The Inside Story of How Leadership Failures, Politics, & Selfishness Doomed the U.S. Coronavirus Response 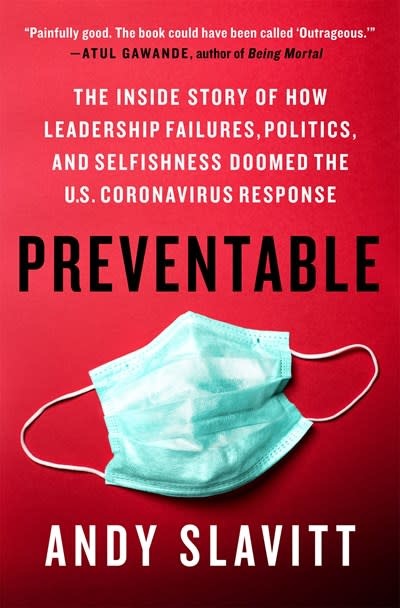 Preventable: The Inside Story of How Leadership Failures, Politics, & Selfishness Doomed the U.S. Coronavirus Response

A definitive, behind-the-scenes look at the U.S. Coronavirus crisis from one of the most recognizable and influential voices in healthcare

From former head of Obamacare Andy Slavitt, Preventable is the definitive inside account of the United States' failed response to the Coronavirus pandemic. Slavitt chronicles what he saw and how much could have been prevented -- an unflinching investigation of the cultural, political, and economic drivers that led to unnecessary loss of life.

With unparalleled access to the key players throughout the government on both sides of the aisle, the principal public figures, as well as the people working on the frontline involved in fighting the virus, Slavitt brings you into the room as fateful decisions are made and focuses on the people at the center of the political system, health care system, patients, and caregivers. The story that emerges is one of a country in which -- despite the heroics of many -- bad leadership, political and cultural fractures, and an unwillingness to sustain sacrifice light a fuse that is difficult to extinguish.

Written in the tradition of The Big Short, Preventable continues Andy Slavitt’s important work of addressing the uncomfortable realities that brought America to this place. And, he puts forth the solutions that will prevent us from being here again, ensuring a better, stronger country for everyone.

ANDY SLAVITT served as the Acting Administrator of the Center for Medicare and Medicaid Services under President Obama from 2015 to 2017. He is the host of the podcast #IntheBubble, a top-ranked podcast on life during the global pandemic. Slavitt is currently Board Chair of United States of Care, a national non-profit health advocacy organization he founded, as well as a founding partner of Town Hall Ventures, a healthcare investment firm that serves underrepresented communities. He is co-chair of a national initiative on the future of health care at the Bipartisan Policy Center. A graduate of the University of Pennsylvania and Harvard Business School, he lives in Minnesota with his wife and two sons.