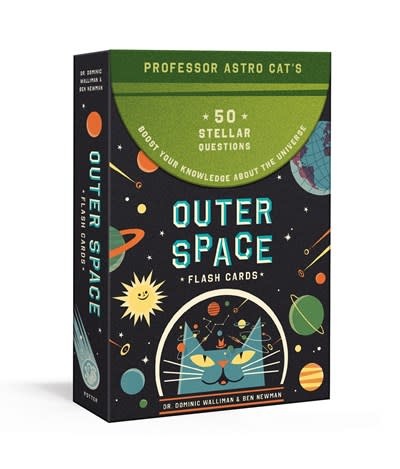 Based on the hit cult book Professor Astro Cat’s Frontiers of Space, these out-of-this-world flash cards are fun and educational for parents and kids alike!

This deck of flash cards creates astronomical family fun, especially for fans of Ben Newman’s exciting, colorful art from the children’s nonfiction book Professor Astro Cat’s Frontiers of Space. These flash cards cover everything from the solar system to space travel, exploration and discovery, and more to help your cadets learn as much about the universe as Astro Cat. With full-color cards featuring delightful mid-century art from the book, these flash cards make learning about space truly stellar.

Dr. Dominic Walliman is a scientist who works on quantum computers. He studied quantum device physics at Birmingham University, where he also taught physics. He also holds a BSc and MSc in computer science. He is the co-author of the Professor Astro Cat books, which have been translated into eighteen languages.

Ben Newman has developed a distinct aesthetic over the years: a contemporary fusion of bold shapes, bright colors, and playful characters which has been described as "bauhaus fuzzy felt." He has produced work for a large range of clients, including the Tate Modern, New York Times, BBC Radio 4, Google, and The New Yorker. His practice extends outside of commercial work into worldwide exhibitions, paintings, and three-dimensional collaborations and he spends the majority of his time collaborating on the Professor Astro Cat children's books with his longtime friend Dr. Dominic Walliman.