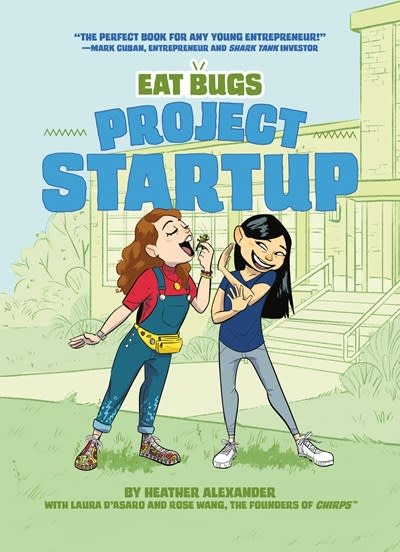 Inspired by the true story of two friends who landed a deal on Shark Tank. Sixth-grade students-turned-entrepreneurs are on a mission to save the world, one bug at a time!

Hallie and Jaye are both sixth graders at Brookdale Middle School, but they couldn’t be more different. Jaye is one of the popular kids who’ll do almost anything to maintain her status. Hallie’s only friend has moved away, and she couldn’t care less what anyone thinks of her. So when the two girls are paired up as partners for a pitch competition held by their Business Education and Entrepreneurship class, it’s not exactly a perfect match. After all, Jaye doesn’t want to be seen with the kid who was dubbed “Bug Girl” after eating a fried cricket during a class trip to the zoo!

But the pair are stuck together, and soon enough Jaye is also stuck with Hallie’s idea: finding creative ways to sell bugs as food. Jaye’s not thrilled but is willing to give it a shot, since winners get to compete in the county competition, potentially followed by states and nationals. And Jaye wants to win.

As the competition heats up, can Hallie and Jaye make the judges say “Bug appétit!” or will they only hear crickets?

Based on the true story of a sustainable protein start-up company, this illustrated novel is a reimagining for a middle-grade reader. Chirps founders Rose Wang and Laura D’Asaro met as freshmen at Harvard University and cooked up the concept of selling chips made with cricket flour to help Americans feel more comfortable eating bugs. Together, Rose and Laura appeared on the TV show Shark Tank to pitch their idea and landed a deal with Mark Cuban. Chirps chips are now sold in stores across the nation.

Heather Alexander is the author of numerous books for children, both fiction and nonfiction. Her fiction series include Wallace and Grace Take the Case and The Amazing Stardust Friends, and her nonfiction series include Life of Earth and A Child’s Introduction to…The former editorial director of Parachute Press, Heather has edited over 100 children’s fiction series, including the best-selling Goosebumps. She currently works as a children’s book editor and lives in Los Angeles. Learn more about Heather at her website: heatheralexanderbooks.com.

Laura D’Asaro and Rose Wang are the co-founders of Chirps, one of the first companies to make food with cricket protein. Both are Shark Tank winners, Forbes 30 under 30 social entrepreneurs, ELLE USA Impact Award winners, Echoing Green fellows, MassChallenge Gold Winners, and Harvard Dean’s Design Challenge winners. In addition, Rose is a TEDx speaker, and Laura holds multiple world records, including the record for the world’s largest nachos (yes, it was made with cricket chips). They also sit on the board of an education nonprofit, Wema Inc., in Kenya. Laura and Rose were college roommates at Harvard, and now both live in San Francisco, California.

Vanessa Flores began drawing at the age of three, inspired by animated movies and books. Summers in Puerto Rico fueled her love for mountains and magic. She loves illustrating humor, magical realism, and representing her Dominican and Puerto Rican culture through the art of storytelling. Vanessa currently lives in Orlando, Florida, where she enjoys trying new food and meditating in botanical gardens. www.vanessafloresart.com.