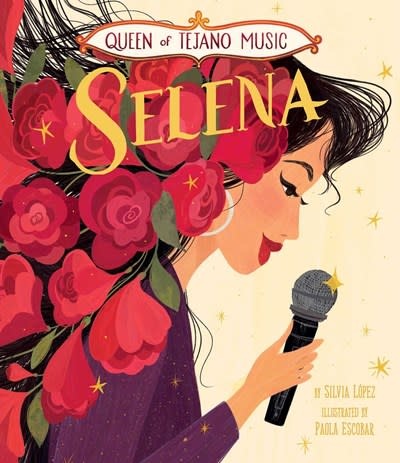 "There's a lot of text in the book, but it's smartly framed within two-page spreads, and very little of it feels extraneous. ...A worthy picture-book primer on the Queen of Tejano music."-Kirkus Reviews

This is a moving and impassioned picture book about the iconic Queen of Tejano music, Selena Quintanilla, that will embolden young readers to find their passion and make the impossible, possible!

Selena Quintanilla's music career began at the age of nine when she started singing in her family's band. She went from using a hairbrush as a microphone to traveling from town to town to play gigs. But Selena faced a challenge: People said that she would never make it in Tejano music, which was dominated by male performers. Selena was determined to prove them wrong.

Born and raised in Texas, Selena didn't know how to speak Spanish, but with the help of her dad, she learned to sing it. With songs written and composed by her older brother and the fun dance steps Selena created, her band, Selena Y Los Dinos, rose to stardom! A true trailblazer, her success in Tejano music and her crossover into mainstream American music opened the door for other Latinx entertainers, and she became an inspiration for Latina girls everywhere.

Silvia López, a Cuban native raised in Miami, Florida, served as a children's librarian at schools and public libraries for over three decades. She holds degrees in English, Library Science, and Educational Technology, and is a National Board-Certified Teacher. Her picture book, Just Right Family: An Adoption Story, was released in March 2018. She had previously published children's biographies, as well as award-winning bilingual digital books. Her book, Handimals: Animals in Art and Nature, a collaboration with Italian artist Guido Daniele, was published in April 2019. Another picture book, Pacho, is scheduled for release in 2020.

Paola Escobar is a Colombian graphic designer and illustrator. She has worked for a variety of publishers, including Oxford University Press, Penguin Random House, Scholastic UK, Laurence King, HarperCollins, and Little, Brown Book Group; as well as a broad range of print and digital magazines. She currently works as a freelance illustrator and lives very happily in Bogota, Colombia, with her husband and dog, Flora.