Home » Race for the Escape 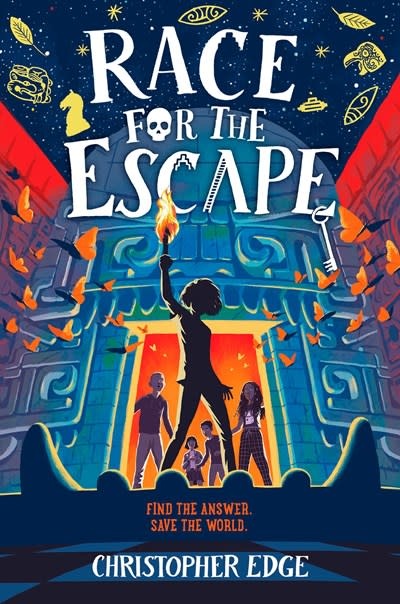 Race for the Escape

Five kids. One ultimate escape room. Can they solve it—or will they die trying? From the award-winning author of The Many World of Albie Bright comes a brand-new adventure that will having you racing to finish.

When Ami Oswald arrives at The Escape—a new, supposedly impossible-to-beat escape room—all she wants it an evening of adventure for her birthday. She deserves it, after all her hard work. But as soon as the game starts, Ami and her four teammates realize they may have gotten more than they bargained for.

Now, the only way Ami and her friends can get out is by solving the mysterious riddle the Escape’s Host has given them: Find the Answer, save the world. But the Answer could be anywhere, and in this game, a single mistake could be deadly. Because, as Ami quickly finds out, the danger in these rooms is very, very real.

Join Ami and the rest of the Five Mind as they face ancient Mayan warriors, a sinister library, and even prehistoric beasts in their quest to find the Answer and save the world, before it’s too late. Can you escape the Escape? The world is betting on your success…

Christopher Edge is an award-winning children’s author whose books have been translated into more than twenty languages. His novel The Infinite Lives of Maisie Day won the STEAM Children’s Book Prize and his last four novels were all nominated for the prestigious CILIP Carnegie Medal. Before becoming a writer, he worked as an English teacher, editor and publisher – any job that let him keep a book close to hand – and he now lives in Gloucestershire with his wife and family, close to his local library. Visit Christopher online at christopheredge.co.uk and on Facebook and follow him on Twitter.