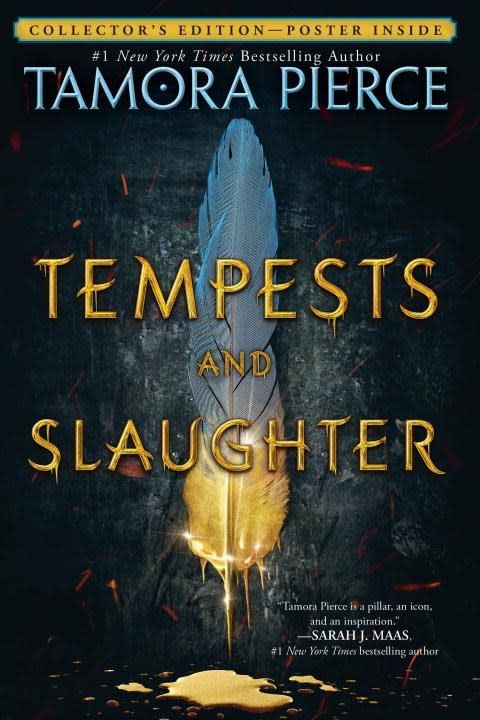 The Numair Chronicles 01 Tempests and Slaughter

The highly anticipated NEW Tortall Legend from TAMORA PIERCE, the #1 New York Times bestselling author who is legend herself, is a must-read for any fantasy lover!

Arram. Varice. Ozorne. In the first book in the Numair Chronicles, three student mages are bound by fate…fated for danger.

Act fast! The first printing of the hardcover includes a collector’s edition poster!

Arram Draper is on the path to becoming one of the realm’s most powerful mages. The youngest student in his class at the Imperial University of Carthak, he has a Gift with unlimited potential for greatness—and for attracting trouble. At his side are his two best friends: Varice, a clever girl with an often-overlooked talent, and Ozorne, the “leftover prince” with secret ambitions. Together, these three friends forge a bond that will one day shape kingdoms. And as Ozorne gets closer to the throne and Varice gets closer to Arram’s heart, Arram realizes that one day—soon—he will have to decide where his loyalties truly lie.

In the Numair Chronicles, readers will be rewarded with the never-before-told story of how Numair Salmalín came to Tortall. Newcomers will discover an unforgettable fantasy adventure where a kingdom’s future rests on the shoulders of a talented young man with a knack for making vicious enemies.

“Tamora Pierce’s books shaped me not only as a young writer but also as a young woman. She is a pillar, an icon, and an inspiration. Cracking open one of her marvelous novels always feels like coming home.”
—SARAH J. MAAS, #1 New York Times bestselling author

Series Overview: In this epic fantasy series, Arram Draper must flee Carthak as the fugitive Numair Salmalin, the most powerful mage of the realm.

The Year of Tamora Pierce begins in Fall 2017 with TORTALL: A SPY’S GUIDE and the Trickster’s Duet reissues. In Fall 2018 we have FIRST TEST GRAPHIC NOVEL and the Protector of the Small Quartet reissues.