Home » Red or Blue, I Like You! (Sesame Street) 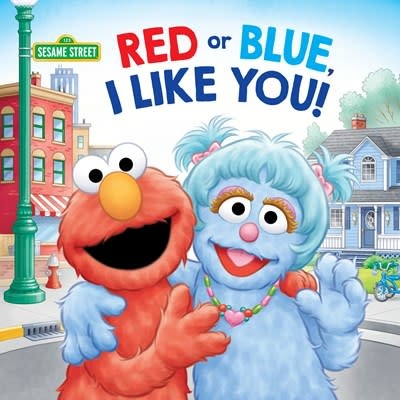 In this wonderful book about acceptance and diversity, Elmo becomes friends with a blue monster named Angela. Unlike on Sesame Street where monsters of all colors live, Angela’s neighborhood only has blue monsters. The new friends soon learn that red monsters and blue monsters may look different on the outside, but they are very much alike on the inside! The subtle messages within the story will help young children to be more accepting and inclusive when it comes to people who look and/or think differently than they do.

Sesame Workshop, the nonprofit educational organization behind Sesame Street, aims to help kids grow smarter, stronger, and kinder through its many unique domestic and international initiatives. These projects cover a wide array of topics for families around the world.

SARAH ALBEE writes children’s books for many age groups and under a number of pseudonyms. She has had three of her books appear on the New York Times Bestseller list. Before she began her career as a children’s book writer and editor, Sarah was a newspaper cartoonist and a semiprofessional basketball player.

TOM BRANNON is a popular illustrator who has worked on many different book series, including Sesame Street, Muppet Babies, and Playhouse Disney.

TOM BRANNON is a popular illustrator who has worked on many different book series, including Sesame Street, Muppet Babies, and Playhouse Disney.