Home » Rise Up and Write It 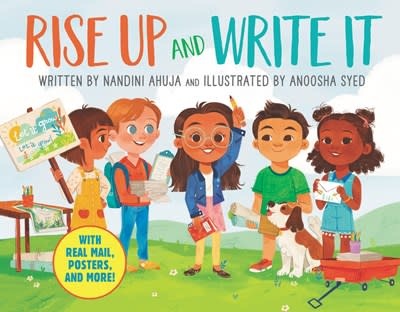 Rise Up and Write It

A Is for Activist meets The Jolly Postman in Rise Up and Write It, an original interactive novelty storybook about a young activist determined to build a new community garden for her neighborhood that combines a celebration of civic engagement with the hands-on fun of pull-out letters, posters, and postcards. It’s sure to encourage young readers to want to get up and get involved.

When Farah Patel realizes that the butterflies have disappeared from her neighborhood, she realizes that it’s because there aren’t enough flowers to attract them. She can’t help but think, “This isn’t right.”Luckily enough, Farah’s city is looking for ideas for what to do with the empty lot next door. Farah has the perfect idea—make it into a community garden to bring back a little green to their block! But when Farah discovers that she isn’t the only one with an idea for the future of her neighborhood, she’ll have to turn to her community for help. Follow along with Farah as she rises up and brings her neighborhood together with letters, petitions, postcards, and more to help make their home a little better—one step at a time.Encouraging young readers to engage with civics in their own lives in an accessible and interactive way, Rise Up and Write It is the perfect book for any budding young activist.

Nandini Ahuja is a social worker in New York City. She spends much of her time searching for the perfect doughnut and thinking about magic. Nandini lives with her husband in a cozy apartment, where they drink lots of coffee.Anoosha Syed is a Pakistani-Canadian illustrator who has worked on over twenty picture books. She is also a character designer for animation, and her past clients include Google, Netflix, and Disney Jr. Anoosha has a passion for creating charming characters with an emphasis on diversity and inclusion.