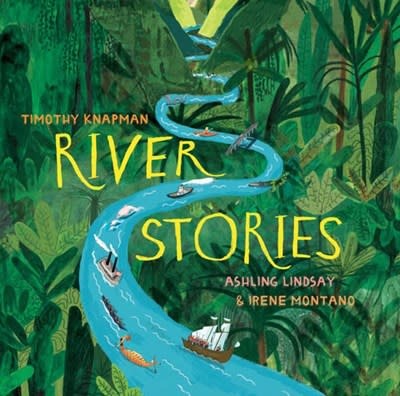 Sail along five mighty rivers around the world and open up the giant fold-out pages to reveal incredible stories from history, mythology and modern times.

This gorgeous gift book will take you on a world adventure via the world's greatest rivers. The Yangtze tells of dragons and dolphins, while the Rhine whispers about castles and Frankenstein. Explore pyramids, tombs and temples by the Nile, and search for lost cities and gold alongside the Amazon. And follow the Mississippi to hear of historic battles and dinosaurs.Gorgeously illustrated pages fold out to reveal the full length of each river. Make an epic journey from source to sea and soak up the rivers' amazing stories.

Timothy Knapman is a children’s writer, lyricist and playwright. His children’s books have been translated into twelve languages and include the bestselling Mungo and the Picture Book Pirates and its sequels. His stories have been heard on CBeebies Bedtime Stories and Driver Dan’s Story Train and he does lots of school visits and bookshop readings.Ashling Lindsay is an illustrator from Belfast, Northern Ireland. Her first book, The Night Box (Egmont), written by Louise Greig published in June 2017, was nominated for the CILIP Kate Greenaway Illustration award, shortlisted for the Waterstones Children’s Book Prize and shortlisted for the Klaus Flugge Prize for illustration.Irene Montano is an illustrator based in Palermo, Italy.