Home » Room on the Broom Push-Pull-Slide 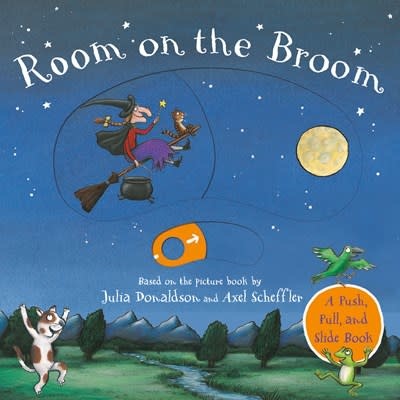 Room on the Broom Push-Pull-Slide

This sturdy board book with fun push-and-pull tabs introduces the beloved characters from Room on the Broom to the very youngest readers.

Little ones will love pulling out the sliders and pushing up the tabs in this interactive book that follows the witch, her cat, and their friends on a smile-filled broom ride.

Dame Julia Donaldson is an internationally beloved children’s book author with more than 65 million books sold worldwide. Her books, including favorites Room on the Broom, The Gruffalo, and The Snail and the Whale, have been translated into more than 70 languages. She and her husband, Malcolm, divide their time between England and Scotland.

Axel Sheffler was born in Germany and now lives in London with his partner and their daughter. He began illustrating children's books after studying at the Bath Academy of Art. His many books are international bestsellers, translated into more than 70 languages, most notably The Gruffalo and Room on the Broom (written by Julia Donaldson), which have both become bestsellers and Academy Award-nominated short films.