Home » Rules of Civility: A novel 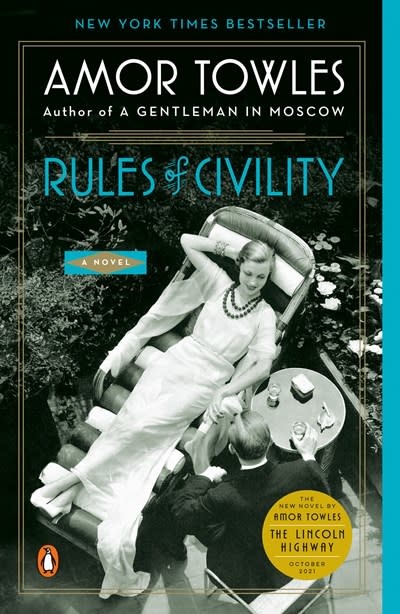 Rules of Civility: A novel

From the New York Times-bestselling author of A Gentleman in Moscow and the forthcoming The Lincoln Highway, a “sharply stylish” (Boston Globe) book about a young woman in post-Depression era New York who suddenly finds herself thrust into high society—now with over one million readers worldwide

On the last night of 1937, twenty-five-year-old Katey Kontent is in a second-rate Greenwich Village jazz bar when Tinker Grey, a handsome banker, happens to sit down at the neighboring table. This chance encounter and its startling consequences propel Katey on a year-long journey into the upper echelons of New York society—where she will have little to rely upon other than a bracing wit and her own brand of cool nerve.

With its sparkling depiction of New York’s social strata, its intricate imagery and themes, and its immensely appealing characters, Rules of Civility won the hearts of readers and critics alike.

Amor Towles is the author of the New York Times bestsellers Rules of Civility and A Gentleman in Moscow. The two novels have collectively sold more than four million copies and have been translated into more than thirty languages. Towles lives in Manhattan with his wife and two children.