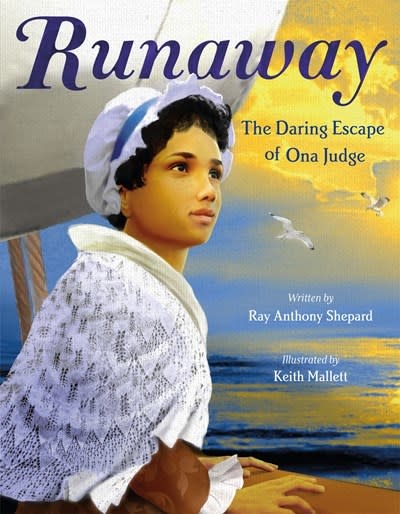 A powerful, lyrical OwnVoices picture book about the enslavement of Ona Judge and her self-emancipation from George Washington’s household.

Ona Judge was enslaved by the Washingtons, and served the President's wife, Martha. Ona was widely known for her excellent skills as a seamstress, and was raised alongside Washington’s grandchildren. Indeed, she was frequently mistaken for his granddaughter. This biography follows her childhood and adolescence until she decides to run away.

This book doesn’t shy away from the horrors of slavery, nor the complex role of house servants. Author Ray Anthony Shepard implicates the reader in Ona’s decision to emancipate herself by using a rhetorical refrain, “Why you run, Ona Judge?” This haunting meditation welcomes meaningful and necessary conversation among readers. Illustrator Keith Mallett’s rich paintings include fabric collage and add further feeling and majesty to Ona’s daring escape.

Ray Anthony Shepard is a former teacher and retired editor-in-chief of a major education publishing company. He is a graduate of the University of Nebraska College of Education and the Harvard Graduate School Education where he received a Martin Luther King Jr. Fellowship from the Woodrow Wilson Foundation. rayanthonyshepard.com

Keith Mallett was born in Pennsylvania and received his formal art training at the Art Students League, and Hunter College in New York City. He has worked as a freelance artist for fifteen years and was the in-house artist for Frontline Art Publishers. Keith's work is currently published by Canadian Art Prints, one of the largest fine art publishers in the world. keithmallett.com