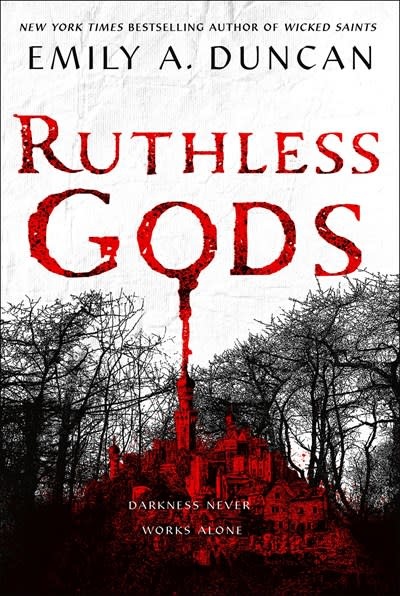 By Emily A. Duncan

Nadya doesn’t trust her magic anymore. Serefin is fighting off a voice in his head that doesn’t belong to him. Malachiasz is at war with who—and what—he’s become.

As their group is continually torn apart, the girl, the prince, and the monster find their fates irrevocably intertwined. Their paths are being orchestrated by someone…or something. The voices that Serefin hears in the darkness, the ones that Nadya believes are her gods, the ones that Malachiasz is desperate to meet—those voices want a stake in the world, and they refuse to stay quiet any longer.

In her dramatic follow-up to Wicked Saints, the first book in her Something Dark and Holy trilogy, Emily A. Duncan paints a Gothic, icy world where shadows whisper and no one is who they seem, with a shocking ending that will leave you breathless.

EMILY A. DUNCAN is the New York Times bestselling author of Wicked Saints. She works as a youth services librarian and received a Master’s degree in library science from Kent State University, which mostly taught her how to find obscure Slavic folklore texts through interlibrary loan systems. When not reading or writing, she enjoys playing copious amounts of video games and Dungeons and Dragons. She lives in Ohio.