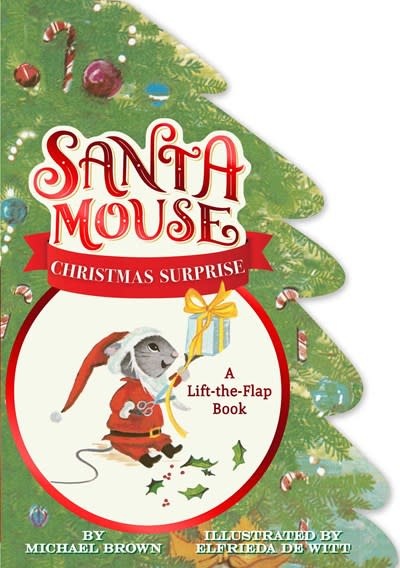 Santa’s littlest helper returns in this novelty lift-the-flap board book. Can you find where Santa Mouse is hiding?

Who is it we look for when it’s colder?

Join one of the bestselling Christmas book characters, Santa Mouse, on a holiday search-and-find adventure. Lift the flaps to see where Santa Mouse is hiding on each spread!

The idea for writing the Santa Mouse stories came to Michael Brown while holding piece of children’s pajama fabric featuring a tiny Christmas mouse. He went to work creating the character that was to become Santa’s little helper. In addition to writing stories about Santa Mouse, Michael Brown performed his own songs in cabaret and was a composer/lyricist and producer/director in the theater.

When introduced to her art, Michael Brown immediately knew that Elfrieda De Witt would be the perfect choice of collaborator for his Santa Mouse stories. Her style perfectly captured the spirit of Christmas. Known affectionately as “Freddie” by friends and family, Elfrieda spent much of her career illustrating for greeting card companies. Brown and De Witt continued their friendship for many years after the publication of the Santa Mouse books.