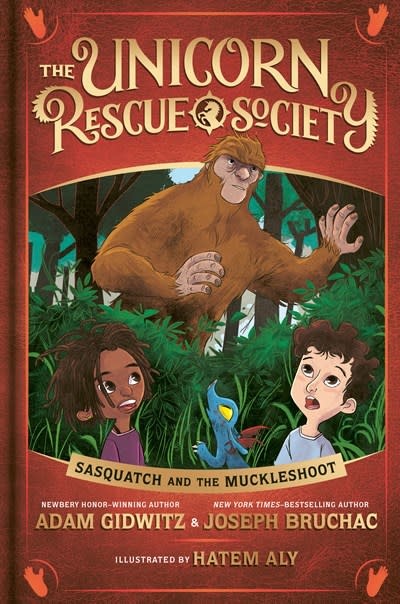 The third adventure of the Unicorn Rescue Society, co-authored by New York Times bestselling author Joseph Bruchac, comes to paperback, featuring fun and lively cover art and a new bonus story continuing the adventure of The Secret Order of the Unicorn.

All Elliot wants is a nice, normal day at school. All Uchenna wants is an adventure. Guess whose wish comes true?

Professor Fauna whisks the kids—and Jersey, of course—off to the Muckleshoot territory in Washington, where film crews have suddenly descended en masse to expose Bigfoot to the world, and the Schmoke logging company is bringing in some awfully large machinery.

Can the Unicorn Rescue Society escape the blades of the Schmokes’ chain saws? Outsmart a cable news team? And are those big, hairy creatures running through the forest really Bigfoot?

Series Overview: Unicorn Rescue Society is an action-packed adventure series that explores cultures all over the world as two friends search out and rescue mythical creatures.

Adam Gidwitz is the author of the critically acclaimed, New York Times bestselling Grimm trilogy. He spent six years researching and writing his Newbery Honor-winning The Inquisitor’s Tale, including a year living in Europe. Adam lives with his family in Brooklyn, NY. Find Adam online at adamgidwitz.com or @AdamGidwitz.

Joseph Bruchac is a New York Times bestselling author of over a hundred books, many of which draw on his Abenaki heritage. Although his northeastern American Indian heritage is only one part of an ethnic background that includes Slovak and English blood, those Native roots are the ones by which he has been most nourished. He continues to work extensively in projects involving the preservation of Abenaki culture, language, and traditional Native skills. Joe and his books have won numerous awards, including the Lifetime Achievement Award from the Native Writers Circle of the Americas.

Chris Lenox Smith is the Creative Director and cofounder of Mixtape Club, an award-winning audiovisual creative studio. Mixtape works with a range of brands and artists, including Google, HBO, ESPN, Spotify, Primus, and They Might Be Giants, to create memorable, narrative-driven films. Chris is a two-time winner of the ADC Young Guns Award for animation and music composition. His work spans across media, from short films and commercial work to musical scores that marry influences from the precomputer era with modern techniques.

Jesse Casey is the Managing Director and cofounder of Mixtape Club, an award-winning audiovisual creative studio. Mixtape works with a range of brands and artists, including Google, HBO, ESPN, Spotify, Primus, and They Might Be Giants, to create memorable, narrative-driven films. Drawing from his twin backgrounds in computer programming and printmaking, Jesse’s work embraces contemporary technology as a means to recreate the craft and artistry of classic film and animation.

Hatem Aly is an Egyptian-born illustrator whose work has been featured on television and in multiple publications worldwide. He currently lives in New Brunswick, Canada, with his wife, son, and more pets than people. Find him online at metahatem.com or @metahatem.