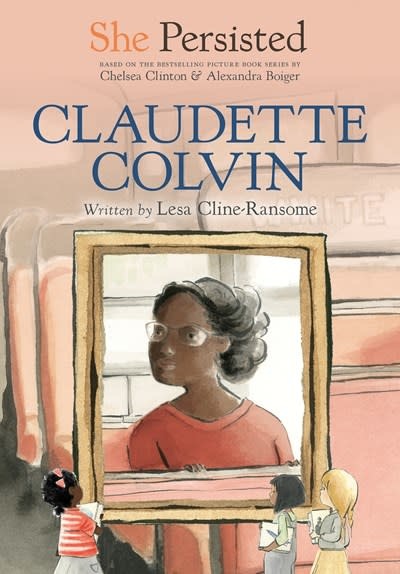 Before Rosa Parks famously refused to give up her seat on a bus in Montgomery, Alabama, fifteen-year-old Claudette Colvin made the same choice. She insisted on standing up—or in her case, sitting down—for what was right, and in doing so, fought for equality, fairness, and justice.

In this chapter book biography by award-winning author Lesa Cline-Ransome, readers learn about the amazing life of Claudette Colvin—and how she persisted. Complete with an introduction from Chelsea Clinton!

Lesa Cline-Ransome (lesaclineransome.com) is the award-winning author of many critically acclaimed books for young readers, including Not Playing By the Rules: 21 Female Athletes Who Changed Sports, Young Pele: Soccer’s First Star, Before She was Harriet, Overground Railroad, and Game Changers: The Story of Venus and Serena Williams. Her numerous honors include the Jane Addams Honor Award, the Christopher Award, Kirkus Best Book of the Year, SLJ Best Book of Year, and three NAACP Image Award nominations. Her debut middle grade novel, Finding Langston, received the Coretta Scott King Author Honor and the Scott O’Dell Award for Historical Fiction. The companion novel is Leaving Lymon. She is currently an SCBWI board member and host of KidLitTV’s Past Present: Giving Past Stories New Life. She lives in the Hudson Valley region of New York with her family. You can follow Lesa on Twitter @lclineransome.