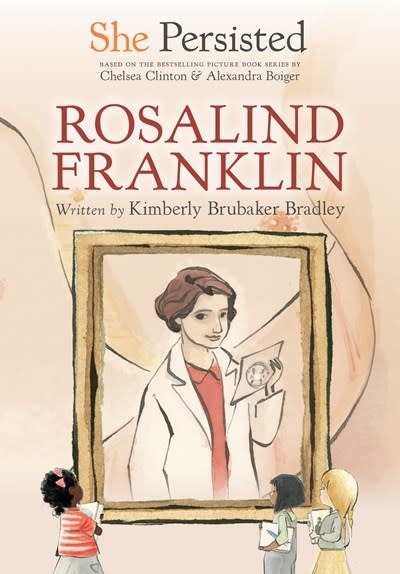 Inspired by the #1 New York Times bestseller She Persisted by Chelsea Clinton and Alexandra Boiger comes a chapter book series about women who spoke up and rose up against the odds--including Rosalind Franklin!

Rosalind Franklin loved science, but that wasn't a field many women were included in when she was young. Still, she persisted in pursuing her dreams, and conducted vital research on both coal and viruses. She also played a key role in the discovery of the double-helix structure of DNA, though her male colleagues took credit for her work.

In this chapter book biography by bestselling and award-winning author Kimberly Brubaker Bradley, readers learn about the amazing life of Rosalind Franklin--and how she persisted.

Complete with an introduction from Chelsea Clinton, black-and-white illustrations throughout, and a list of ways that readers can follow in Rosalind Franklin's footsteps and make a difference!

And don’t miss out on the rest of the books in the She Persisted series, featuring so many more women who persisted!

Kimberly Brubaker Bradley (she/her) is the author of eighteen previous books, including the Newbery Honor winners Fighting Words and The War I Finally Won. A chemist by training, she's long admired Rosalind Franklin, and is thrilled to be able to tell her story to this audience. The mother of two grown children, she lives with her husband, Bart, on a fifty-two-acre horse farm in northeastern Tennessee, with three horses, two dogs, and too many cats. You can visit Kimberly online at kimberlybrubakerbradleycom.wordpress.com and follow her on Twitter @kimbbradley.

Chelsea Clinton (she/her) is the #1 New York Times bestselling author of She Persisted, She Persisted Around the World, She Persisted in Sports, She Persisted in Science, Don't Let Them Disappear, It's Your World and Start Now!, as well as Grandma's Gardens and The Book of Gutsy Women, which she wrote with Hillary Clinton, and Governing Global Health with Devi Sridhar. Chelsea earned a master’s degree in public health from Columbia University’s Mailman School of Public Health, where she is now an adjunct assistant professor, and a PhD in international relations from Oxford University. She is also the Vice Chair of the Clinton Foundation, where she works on many initiatives, including those that help empower the next generation of leaders. She lives in New York City with her husband, Marc, their three children and their dog, Soren.

Gillian Flint (she/her) is an illustrator who has a passion for painting in watercolors. She has been drawing and creating characters for as long as she can remember. Her work has been published in the USA, the UK and Australia. In her spare time she enjoys reading and gardening at her home in the UK. You can visit Gillian online at gillianflint.com and follow her on Instagram @gillianflint_illustration.

Alexandra Boiger (she/her) has illustrated nearly twenty picture books, including the She Persisted series by by Chelsea Clinton; the popular Tallulah series by Marilyn Singer; and the Max and Marla books, which she also wrote. Originally from Munich, Germany, she now lives outside of San Francisco, California, with her husband, Andrea; daughter, Vanessa; and two cats, Luiso and Winter. You can visit Alexandra online at alexandraboiger.com and follow her on Instagram @alexandra_boiger.