Home » She Wanted to Be Haunted 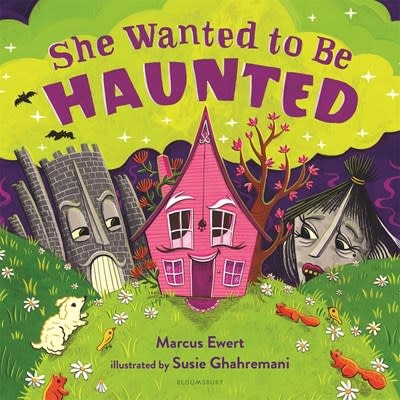 She Wanted to Be Haunted

This frightfully delightful picture book follows a perky little cottage who wishes she were a haunted house.

Clarissa the cottage is adorable, bright pink with shiny windows and flowers growing all around her. But Clarissa doesn’t want to be adorable—being cute is boring. She’d rather be like her father, a creepy castle home to vampires and crypts. Or like her mother, a witch’s hut full of spells and smells.

Clarissa needs something to haunt her rooms, something that will make her less ordinary and less lonely. In order to attract the perfect spectre, she’ll need to change her tone. But her attempts to become haunted make her even cuter than before! Maybe it’s better to just be true to yourself...and THEN perhaps just the right friend will come along.

With whimsical, rhyming stanzas, She Wanted to be Haunted is a delightful, lyrical twist on the ever-important message to be yourself.

Marcus Ewert is the author of several picture books, including Mummy Cat, illustrated by Lisa Brown, a Junior Library Guild selection, and 10,000 Dresses, illustrated by Rex Ray, recipient of the Stonewall Honor Award. Marcus works as a bookseller and lives in an actual turret in an old Victorian mansion in San Francisco. It is very likely haunted. @MarcusEwert

Susie Ghahremani is an award-winning illustrator, exhibiting artist, and designer of the popular and whimsically illustrated gift brand boygirlparty®. She is a graduate of the Rhode Island School of Design (RISD), and she lives in Southern California. boygirlparty.com • @boygirlparty (Instagram)