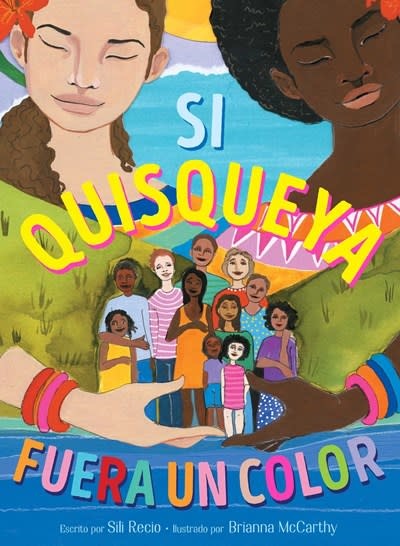 Si Quisqueya fuera un color (If Dominican Were a Color)

The colors of Hispaniola burst into life in this striking, evocative debut picture book that celebrates the joy of being Dominican.

If Dominican were a color, it would be the sunset in the sky, blazing red and burning bright.

If Dominican were a color, it’d be the roar of the ocean in the deep of the night,

With the moon beaming down rays of sheer delight.

The palette of the Dominican Republic is exuberant and unlimited. Maiz comes up amarillo, the blue-black of dreams washes over sandy shores, and people’s skin can be the shade of cinnamon in cocoa or of mahogany. This exuberantly colorful, softly rhyming picture book is a gentle reminder that a nation’s range of hues is as wide as nature’s itself.

Sili Recio has been calling herself a writer since she won a trophy in a poetry contest in the sixth grade. She is an Afro-Dominican storyteller, disruptor, and Mami. Sili earned a bachelor’s degree in psychology from Rollins College. She entered the world of social media via her blog in 2010, and has never looked back. Sili lives in Florida with her daughter, the Frog Princess, and tries not to pass on her love of café con leche to her child. She is failing. You can visit her at SiliRecio.com.

Brianna McCarthy is a mixed media visual communicator working and living in Trinidad and Tobago. She is a self-taught artist and aims to create a new discourse examining issues of beauty, stereotypes, and representation as well as the documenting the process—particularly poignant in an ever smaller digitally connected world. Her form takes shape through masking and performance art, fabric collage, traditional media, and installation pieces.