Home » Side by Side/Lado a lado 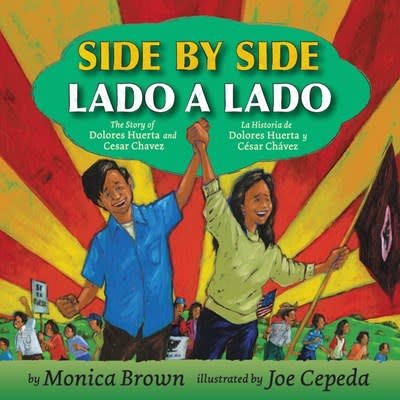 Side by Side/Lado a lado

Award-winning author Monica Brown teamed up with acclaimed illustrator Joe Cepeda to create this powerful bilingual picture-book biography that pays tribute to Mexican American culture by beautifully narrating the collaboration between Dolores Huerta and Cesar Chavez, two of the most influential people of the twentieth century. Now in paperback!

A powerful and accessible bilingual picture book that highlights "the power and impact of ordinary but dedicated citizens."Every day, thousands of farmworkers harvested the food that ended up on kitchen tables all over the country. But at the end of the day, when the workers sat down to eat, there were only beans on their own tables. Then Dolores Huerta and Cesar Chavez teamed up. Together, Dolores and Cesar were able to motivate thousands of immigrant farmworkers to stand up for their rights. They organized many peaceful protests that helped the workers obtain better working conditions, better pay, and better lives.In addition to the short, lively bilingual text, Monica Brown’s focus on Dolores Huerta—who coined the phrase “Sí se puede!” or “Yes we can!” which is the motto of the United Farm Workers of America—sets this apart from other biographies about Cesar Chavez and provides young girls with a strong female role model.

Monica Brown, PhD, is the award- winning author of Waiting for the Biblioburro/ Esperando el Biblioburro, Marisol McDonald Doesn’t Match/no combina, and the Lola Levine chapter book series, including Lola Levine Is Not Mean; Lola Levine, Drama Queen; and Lola Levine and the Ballet Scheme. She lives in Arizona with her family and teaches at Northern Arizona University. Find out more at www.monicabrown.net.Joe Cepeda is the bestselling illustrator of Nappy Hair by Carolivia Herron (Knopf) and What a Truly Cool World by Julis Lester (Scholastic), among other titles. He, his wife, and their son live in Southern California.