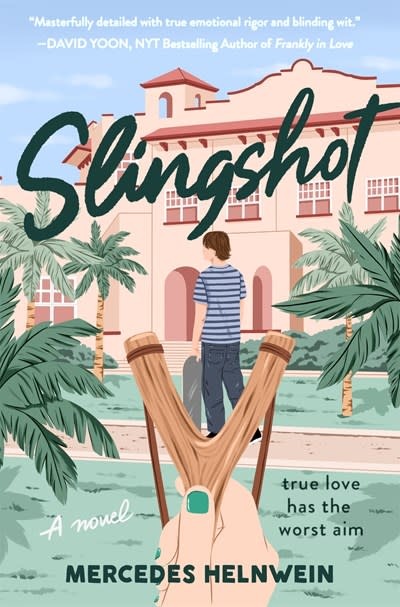 Grace Welles had resigned herself to the particular loneliness of being fifteen and stuck at a third-tier boarding school in the swamps of Florida, when she accidentally saves the new kid in her class from being beat up. With a single aim of a slingshot, the monotonous mathematics of her life are obliterated forever… because now there is this boy she never asked for. Wade Scholfield.

With Wade, Grace discovers a new way to exist. School rules are optional, life is bizarrely perfect, and conversations about wormholes can lead to make-out sessions that disrupt any logical stream of thoughts.

So why does Grace crush Wade’s heart into a million tiny pieces? And what are her options when she finally realizes that 1. The universe doesn’t revolve around her, and 2. Wade has been hiding a dark secret? Is Grace the only person unhinged enough to save him?

Acidly funny and compulsively readable, Mercedes Helnwein’s debut novel Slingshot is a story about two people finding each other and then screwing it all up. See also: soulmate, friendship, stupidity, sex, bad poetry, and all the indignities of being in love for the first time.

MERCEDES HELNWEIN is a visual artist and writer. She was born in Vienna, Austria, and grew up in Germany, Ireland, and partially the U.S. and the U.K. Instead of going to college she moved to L.A. where she began putting on art shows with her friends and selling her drawings. Her obsession with writing began at age ten when she wrote her first short story for a school assignment: The Celery Stick Who Became President. She currently lives and works in L.A. and Ireland.