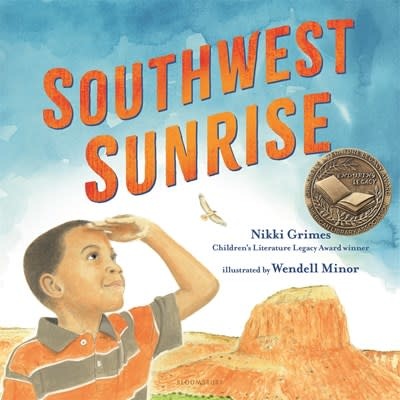 From acclaimed creators Nikki Grimes and Wendell Minor comes a stunning picture book about the beauty of the natural world.

When Jayden and his parents move from New York to New Mexico, he is devastated to leave the city behind. Where are the skyscrapers, the fire escapes, and the traffic? Instead, Jayden finds an endless sky, a bird’s song, and a rainbow of flowers. As he learns to appreciate the natural beauty around him, he finds a new place to call home.

Children’s Literature Legacy Award-winner Nikki Grimes and acclaimed illustrator Wendell Minor draw readers into the natural world with this lyrical story of finding beauty wherever you are.

Acclaim for One Last Word

Nikki Grimes is a New York Times bestselling author and the recipient of the Children's Literature Legacy Award, the Virginia Hamilton Literary Award, and the NCTE Award for Excellence in Poetry for Children. Her distinguished works include the NAACP Image Award nominee Planet Middle School; Coretta Scott King Award winner Bronx Masquerade; Coretta Scott King Author Honor books Jazmin’s Notebook, Talkin’ About Bessie, Dark Sons, The Road to Paris, and Words with Wings, which was also named an ALA Notable Book; and What Is Goodbye?, an ALA Notable Book. She lives in Corona, California. www.nikkigrimes.com