Home » Spearhead: An American Tank Gunner, His Enemy, and a Collision of Lives in World War II (Adapted for Young Adults) 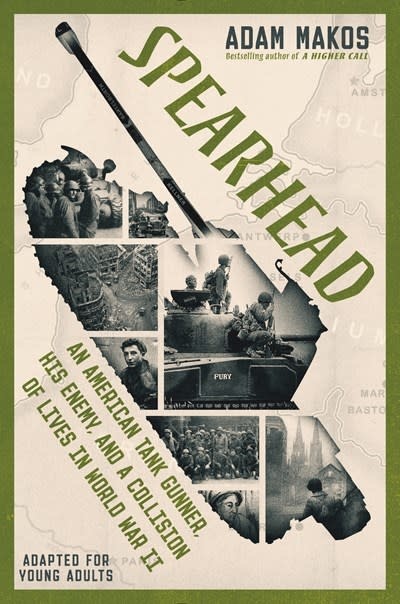 Spearhead: An American Tank Gunner, His Enemy, and a Collision of Lives in World War II (Adapted for Young Adults)

Adapted for young adults from the New York Times bestseller, a riveting and true WWII story of a young man—an American tank gunner—who meets his destiny in an iconic armor duel and forges an enduring bond with his enemy.

Shut the hatches. It’s time to roll out. You’ll find yourself behind enemy lines with Clarence Smoyer and the 3rd Armored Division, the workhorse unit knows as “Spearhead,” the best in the tank armor ranks.

You’ll feel as if you are right beside Clarence and his fellow crew members—all formerly strangers from across America who have now become family to each other. You will be jarred by enemy fire, and then explore the other side, stepping into the boots of German tanker soldier, Gustav Schaefer and his crew. You’ll witness the heartbreaking tragedy, when an innocent young woman is caught in the crossfire. You’ll see what happens when all of these lives collide, and realize how the aftershock still affects the survivors more than a half a century later. A riveting and true account of the perils of war as well as the prospect of forgiveness.

Hailed as “a masterful storyteller” by the Associated Press, Adam Makos is the author of the New York Times bestsellers A Higher Call and Spearhead and the critically acclaimed Devotion. Inspired by his grandfathers’ service, Makos chronicles the stories of American veterans in his trademark fusion of intense human drama and fast-paced military action, securing his place “in the top ranks of military writers,” according to the Los Angeles Times. In the course of his research, Makos has flown a World War II bomber, accompanied a Special Forces raid in Iraq, and journeyed into North Korea in search of an MIA American airman. Visit him online at AdamMakos.com and follow him on Instagram.