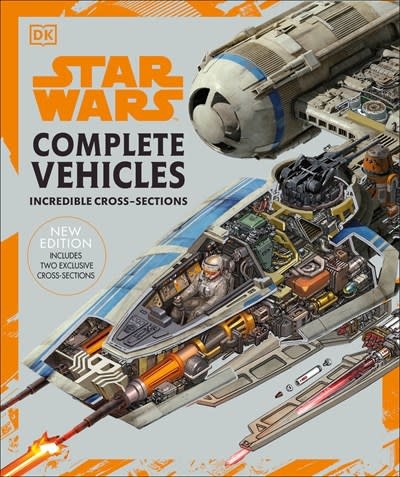 More than 100 magnificent cross-section artworks bring the vehicles of Star Wars to life. New cross-sections, amazing detail, and comprehensive text make this the ultimate reference to the craft of a galaxy far, far away….

- The inner workings of Rey’s speeder

- The advanced technology of the Rebel Alliance’s U-wing

- The devastating weaponry of the Death Star

- The famous corridors of the Millennium Falcon

Pablo Hidalgo has been writing professionally about Star Wars since 1995. In 2000, he joined Lucasfilm to become a full-time Star Wars authority, first as a StarWars.com writer, and now as a creative executive in story development. He has written or co-written several authoritative Star Wars reference books, including Star Wars: Year by Year and Star Wars: The Essential Reader’s Companion, as well as guidebooks to other brands such as Hasbro’s G.I. Joe and Transformers. He lives in San Francisco.

James Luceno is the bestselling author of Dark Lord: The Rise of Darth Vader and three Star Wars: The New Jedi Order novels, among many others.

Ryder Windham is the author of more than 60 Star Wars titles, including Star Wars Blueprints: The Ultimate Collection and the New York Times bestseller Star Wars: The Ultimate Visual Guide. An occasional freelance cartoonist and storyboard artist, he is also an instructor and the Certificate Program Advisor for Comics and Sequential Art at Rhode Island School of Design Continuing Education.

Jason Fry is the author of The Jupiter Pirates young-adult space-fantasy series and has written or co-written more than 30 novels, short stories, and other works set in the galaxy far, far away, including The Essential Atlas and the Servants of the Empire quartet. He lives in Brooklyn, New York, with his wife, son, and about a metric ton of Star Wars stuff.

Kerrie Dougherty is an independent Australian space historian, researcher, and writer. Formerly Curator of Space Technology at the Powerhouse Museum, Sydney, she also lectures in Space Humanities for the International Space University and is a Member of the International Academy of Astronautics. A Star Wars fan since 1977, Kerrie has also contributed to DK’s Star Wars: Complete Locations and Star Wars: Complete Cross-sections.

Richard Chasemore has worked as an illustrator and 3-D computer artist in the US and Europe for nearly two decades, most notably producing work for DK's Incredible Cross Sections and Inside the Worlds of Star Wars.Hans Jenssen studied graphic design at college and specialized in technical illustration. He has co-illustrated a total of 10 Star Wars books alongside Richard Chasemore, with whom he has developed a close friendship.Bios for Curtis Saxton, Kemp Remillard, and John Knoll are forthcoming.