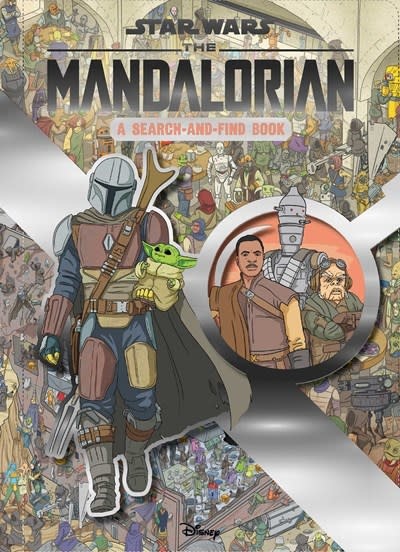 Are you a skilled enough bounty hunter to find the Mandalorian and his allies as they attempt to hide Grogu from the Empire? Search for IG-11, Greef Karga, and more in this interactive search-and-find featuring locations from season 1 of Star Wars: The Mandalorian.

In the wake of the Empire’s fall, Imperial Commander Moff Gideon has a bounty out on the mysterious Force-wielding Grogu. It is your mission to track down and retrieve baby Grogu from the galaxy’s most notorious outlaws: the Mandalorian, Cara Dune, Greef Karga, Kuiil, and IG-11. But be wary, the Mandalorian is a notorious bounty hunter himself, so he and his crew will not be easy to find! With characters from across the Star Wars universe, fans of all ages will enjoy journeying to Nevarro, Tattooine, Arvala-7, and other locations throughout the galaxy in this interactive search-and-find.

Daniel Wallace is a comic book expert, sci-fi sage, and lifelong geek. As the author or co-author of more than two dozen books, including The Marvel Encyclopedia, Spider-Man Character Encyclopedia, Iron Man Manual, The World According to Spider-Man, and the New York Times bestselling Star Wars: The New Essential Guide to Characters, his specialty is exploring the underpinnings of popular fictional universes. Dan lives in Minneapolis, Minnesota.

Art Mawhinney has always been interested in cartoon characters. This led him to attend CalArts, where he became interested in cartoon animation. He opened an animation studio and produced animated TV spots and educational videos. This led to TV storyboarding, where he boarded more than 150 episodes of TV shows, including Rugrats, Family Guy, Wild Thornberrys, and Sonic the Hedgehog. He also worked on the Sonic the Hedgehog comic book for a number of years. Storyboarding led to book illustration, and he has drawn more than 170 children books, for brands including Go Diego Go, Dora the Explorer, Cars, Winnie the Pooh, and Mickey Mouse, as well as Search/Look and Find books for Frozen, Cars, Toy Story, Marvel, Trolls, and Star Wars. He also draws original artwork for children books. In his spare time, he sleeps...