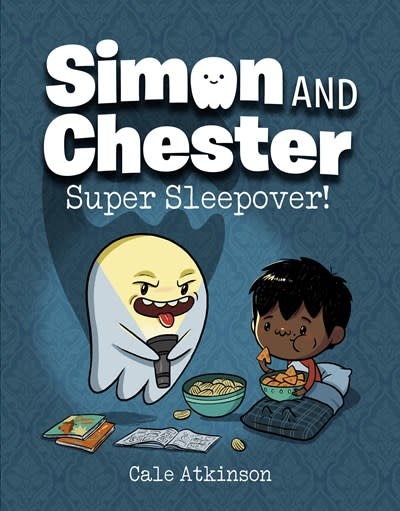 Join Simon and Chester in their second adventure featuring all the ups-and-downs of a sleepover party! A hilarious new graphic novel series for fans of The Bad Guys and Dog Man.

Welcome to the world of Simon and Chester, ghost and boy duo extraordinaire.

They are best friends.

And they are about to hit Chester’s VERY FIRST SLEEPOVER.

(Oh, and eat some snacks probably.)

Join Simon and Chester in their second adventure, and fall in love with this hilarious odd couple by fan favorite author and illustrator Cale Atkinson.

Series Overview: Simon and Chester are totally normal best friends…except that Simon is a ghost! Follow their hilarious exploits in this not-to-be-missed early graphic novel series.

Potential for more books to be contracted.

CALE ATKINSON is an illustrator, writer and animator living lakeside with his family in Kelowna, British Columbia, whose books include Sir Simon: Super Scarer, Where Oliver Fits, Monsters 101, Unicorns 101 and Simon and Chester: Super Detectives to name a few. Cale is assisted in his artistic endeavors by Charlie, a wise and noble floof.