Home » Tales to Keep You Up at Night 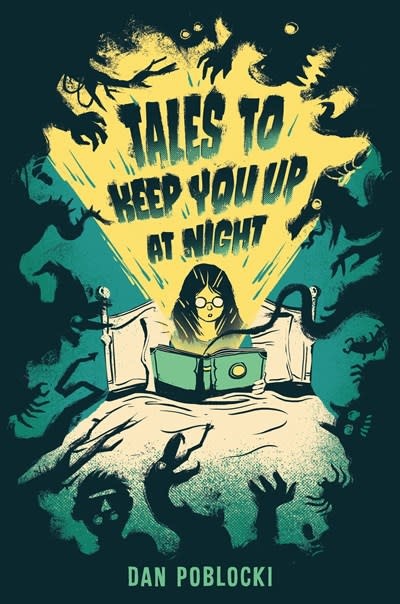 Tales to Keep You Up at Night

From the co-author of the #1 New York Times bestselling series The Magic Misfits, comes a spectacularly spooky novel that will keep you up way past bedtime.

Perfect for fans of Scary Stories to Tell in the Dark!

Amelia is cleaning out her grandmother’s attic when she stumbles across a book: Tales to Keep You Up at Night. But when she goes to the library to return it, she’s told that the book never belonged there. Curious, she starts to read the stories: tales of strange incidents in nearby towns, of journal entries chronicling endless, twisting pumpkin vines, birthday parties gone awry, and cursed tarot decks. And at the center of the stories lies a family of witches. And witches, she’s told, can look like anyone…

As elements from the stories begin to come to life around her, and their eerie connections become clear, Amelia begins to realize that she may be in a spooky story of her own…

With hair-raising, spine-chilling prose, Dan Poblocki delivers a collection of interconnected stories that, if you’re anything like Amelia, is sure to keep you up late in the night.

Dan Poblocki is the co-author with Neil Patrick Harris of the #1 New York Times bestselling series The Magic Misfits (writing under the pen-name Alec Azam). He’s also the author of The Stone Child, The Nightmarys, and the Mysterious Four series. His recent books, The Ghost of Graylock and The Haunting of Gabriel Ashe, were Junior Library Guild selections and made the American Library Association’s Best Fiction for Young Adults list in 2013 and 2014. Dan lives in Saugerties, New York, with two scaredy-cats and a growing collection of very creepy toys.

Marie Bergeron was born and raised in Montreal. After studying cinematography, she attended École de Design. Her style is inspired by many things, including films and games, contrasting a more graphic approach with organic strokes. Her clients have included Marvel Studios, Paramount Pictures, Warner Bros., Fox Entertainment, and more.